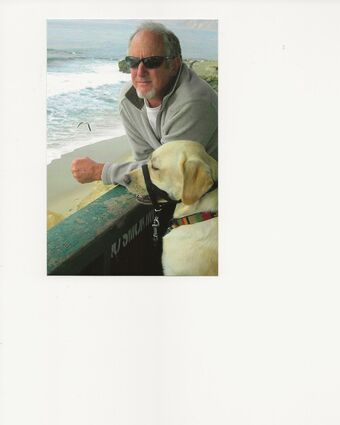 In memory of a life so beautifully lived.

He was born Eric Francis Williams on Nov. 17, 1955, in Sacramento, California. The family moved to Fallbrook in 1969 where Rick attended Potter Junior High.

Rick is probably best known as the owner-operator of Fallbrook Window Washing Company which his father began in 1972. Rick began working with his dad while attending Fallbrook High School. He bought Dad's share of the business in 1998 and always enjoyed the work, especially the wonderful clients.

Rick got interested in dog training after bringing home a puppy from an Avocado Festival years ago. He and puppy Jack decided they needed some training. Rick was a natural and became a dog trainer himself. He started his business, Rick Williams Personal Dog Training, and taught both in-home instruction and group classes at the Fallbrook Community Center.

As a family, we began volunteer puppy raising for Canine Companions for Independence, an organization that trains service dogs for people with disabilities. Our family raised eight puppies with four graduating from advanced training.

Rick began attending Calvary Chapel with his family and began hearing and studying the Word of God. The church resonated with Rick's heart and mind and he would get up early to study and memorize the Bible. In March of this year, he completed writing a devotional series based on his in-depth study of "The Full Armor of God."

Everyone who knew Rick loved him. He was selfless, generous and truly enjoyed serving others.

Rick will be missed here, but we all have the promise that we will see him again in heaven.

A Celebration of Life is planned on Saturday, April 30 at 1 p.m. at Calvary Chapel Servant's Church, 1109 E. Fallbrook Street, Fallbrook. A reception will follow immediately.