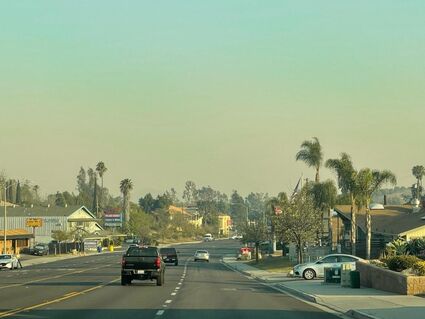 Heavy smoke is seen from downtown Fallbrook of the Laguna Niguel "Coastal FIre".

LAGUNA NIGUEL (CNS) - A wind- and terrain-driven fire chewed through

Laguna Beach today, then marched relentlessly through an enclave of

multimillion-dollar estates on the hillside overlooking the ocean, destroying at least 20 homes.

NCFPD PIO John Choi said Fallbrook has sent two engines and a strike team was sent from the north zone.

The fire was estimated to be about three acres as of 3:30 p.m., but spread to at least 30 acres by 5 p.m. Thirty minutes later, the OCFA put the blaze at 150 acres with no containment. Crews on scene estimated the size at about 200 acres by 6:15 p.m.

The flames spread quickly as they tore through thick brush on the hillside, aided by ocean winds that sparked spot fires ahead of the main blaze.

The fire pushed its way uphill, advancing on Aliso Summit Trail and into the neighboring multimillion-dollar estates.

Orange County Fire Authority Chief Brian Fennessy said at a Wednesday night news conference that an estimated 20-plus homes had been destroyed. The flames crested a hilltop and advanced into an exclusive neighborhood, swallowing homes along La Vue and Coronado Pointe near the Aliso Summit Trail.

Sara Nuss-Galles, who lives on Via Estoril, told the Los Angeles Times

she watched the fire grow for more than an hour before she evacuated the area.

``My clothes smell from the hour I spent in the house,'' Nuss-Galles told The Times. ``It's just plumes of smoke. It's very scary.''

There were no immediate reports of injuries.

The flames advanced even as fixed-wing planes dropped fire retardant on the hillside in hopes of slowing the advance of the flames. Several water-dropping helicopters were also being employed in the firefight.

Evacuations were ordered in the Coronado Pointe and Pacific Island

Drive areas, while voluntary evacuation orders were issued in the Balboa Nyes

after-school activities at Laguna Beach High School were also evacuated, according to the school district.

The "Coastal Fire" has burned 150 acres so far in Laguna Niguel. NCFPD PIO John Choi said they are sending a strike team from the north zone and two e gines from NCFPD. The strong southwest winds are an issue and there have been structural losses. Evacuations are in place. At 5:30 p.m., sheriff's deputies went door to door to tell people to evacuate.

The heavy smoke is being seen around the southland.

This is a breaking story and will be updated throughout the evening.