Standing room only crowd sounds off about detachment proposal

FPUD reports that switching water suppliers would save Fallbrook and Rainbow customers $7.6M a year 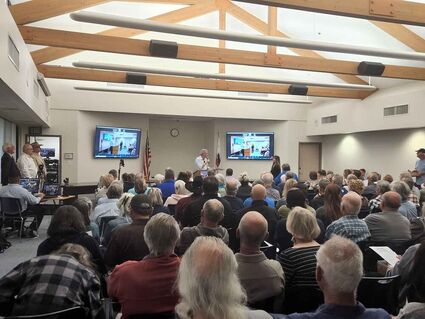 Local residents spoke out at a packed standing room only town hall meeting last week about a proposal by the Fallbrook Public Utility District and Rainbow Municipal Water District to switch water suppliers, a change that they are reportng would save ratepayers millions of dollars.

Following years of escalating water costs from the San Diego County Water Authority, averaging 8% per year, FPUD and Rainbow are seeking to change water suppliers – through a process known as detachment – from the Water Authority. They would form a new attachment to the Eastern Municipal Water District.

According to an independent analysis, FPUD and Rainbow ratepayers would save a combined $7.6 million a year by switching to Eastern.

Keene Simonds, the executive officer of the San Diego Local Agency Formation Commission, and Adam Wilson, a consultant to LAFCO, were invited to brief

attendees about the LAFCO review and approval process.

"We're very grateful to everyone, especially Supervisor Desmond and Mr. Simonds, for coming out and taking part in this town hall," said Bebee. "This is a very important issue for the people of Fallbrook and Rainbow and we want to make sure that everyone has all the facts and are able to ask their questions and express their opinions."

"The rising cost of water is impacting all of us here in Rainbow and Fallbrook, especially our agricultural community, which is the backbone of our economy," said Kennedy. Our goal here is simple – save our customers money while continuing to deliver a reliable supply of water."

The meeting was attended by nearly 150 local residents. Attendees spoke out on issues that ranged from the time it is taking LAFCO to decide the matter to the suggestion by the Water Authority that FPUD and Rainbow should pay a hefty exit fee.

Among the public speakers was Eileen Delaney, chair of the Fallbrook Community Planning Group, who expressed the group's strong support for the switch as well as its opposition to the districts paying any exit fee. The planning group joins the Rainbow Community Planning Group and the Fallbrook Chamber of Commerce in supporting the switch to Eastern.

Supervisor Desmond, who also serves as chair of LAFCO, told attendees that he can't take a position at this time because doing so would preclude him from voting on the issue. After addressing the audience at the start of the meeting, Desmond stayed and listened to all the public speakers and remained afterwards to meet with attendees one-on-one.

The town hall also included a discussion of a report conducted for LAFCO by Dr. Michael Hanemann, who reviewed three key areas: water reliability, financial impacts to the involved parties, and a potential exit fee.

Regarding water reliability, Wilson said: "Dr. Hanemann concluded that both Eastern and the County Water Authority are both reliable wholesale water suppliers."

On the financial impacts, Hanemann's report concluded that Fallbrook and Rainbow ratepayers would save approximately $7.6 million a year by purchasing their water from Eastern instead of the Water Authority.

Simonds explained that Hanemann also concluded that Fallbrook and Rainbow should pay an exit fee to the Water Authority of at least $13 million a year, but only for a defined period of time.

However, both Fallbrook and Rainbow dispute Hanemann's suggested exit fee.

FPUD and Rainbow leaders agree that some level of compensation should be provided through ongoing property tax payments as described in the act that created the Water Authority, but that the proposed exit fee does not comply with the law. They have asked LAFCO and their attorneys to thoroughly review

In addition, it was reported that local ratepayers have paid millions of dollars to the California Water Authority for future projects that have not been started. 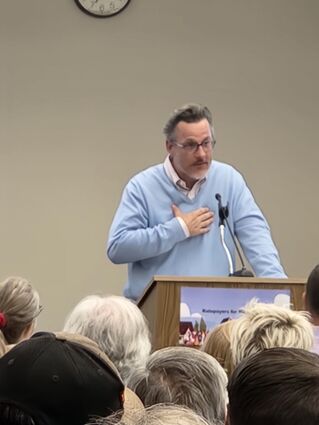 LAFCO, which is governed by local appointed and elected officials and is responsible for overseeing the establishment, expansion and boundary changes of cities and special districts, is expected to decide later this year if the districts can change suppliers. If approved, Fallbrook and Rainbow voters would have the

final say in an election held in each of the two districts' service areas.

The escalating cost of water in San Diego County has been a hot topic in recent years. A study conducted last year by statista.com concluded that San Diego's water rates are among the highest in the nation. Further, a 2017 report by the American Water Works Association found that San Diego area households pay more than twice the national average for water.

According to the Authority's recently adopted Long-Range Financing Plan, water costs could jump another 50% over the next five years.