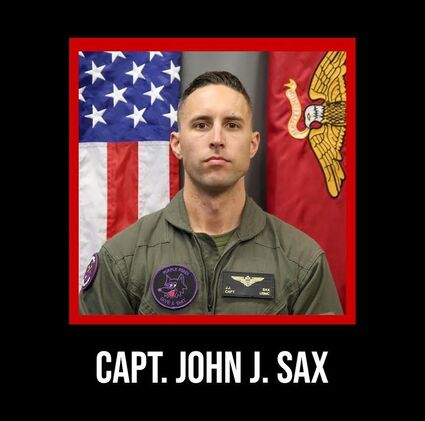 CAPT. JOHN J. SAX, son of ex-Dodger baseball player Steve Sax, was one of five Marines who died in the Imperial County crash on Wednesday, June 8, 2022. All five Marines were assigned to Marine Medium Tiltrotor Squadron 364.

Mexico, a crew chief were all on board the MV-22B Osprey that went down shortly before 12:30 p.m. Wednesday in an ``aviation mishap'' while on a training mission near Glamis, east of Brawley, according to the Third Marine Aircraft Wing.

``It is with heavy hearts that we mourn the loss of five Marines from the Purple Fox family'' Lt. Col. John C. Miller said. ``This is an extremely

difficult time... and it is hard to express the impact that this loss has had on our squadron and its families. Our primary mission now is taking care of the

family members of our fallen Marines and we respectfully request privacy for their families as they navigate this difficult time.''

Steve Sax, 62, issued the following statement: ``It is with complete devastation that I announce that my precious 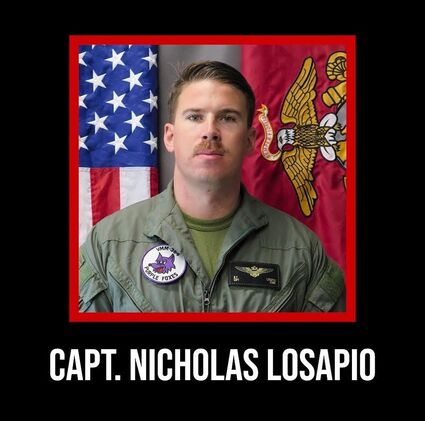 CAPT. NICHOLAS LOSAPIO was one of five Marines who died in the Imperial County crash on Wednesday, June 8, 2022. All five Marines were assigned to Marine Medium Tiltrotor Squadron 364.

son, Johnny was one of the five US Marines that perished on Wednesday, June 8 in the Osprey Military crash near San Diego.

``For those of you that knew Johnny, you saw his huge smile, bright light, his love for his family, the Marines, the joy of flying airplanes and

defending our country! He was my hero and the best man I know, there was no better person to defend our country,'' the statement said.

The cause of the crash was under investigation.