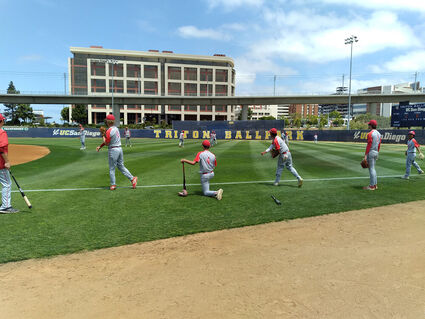 The Warriors warm up for the CIF baseball championship game at UC San Diego, May 27.

For the first time since 2006, Fallbrook High School reached the CIF baseball finals.

The Warriors advanced to the Division IV final with five wins in the double-elimination playoffs. Mission Bay defeated Fallbrook in the championship game May 27 at the University of California, San Diego.

"It was a great season," said Fallbrook coach Pat Walker.

The Warriors' regular-season record was 15-13. This year's Valley League consisted of five teams. Oceanside won the league championship with an 8-4 record in Valley League competition; Mission Vista had a 7-5 mark;...