Bonta, Hochman to face off in California's AG race 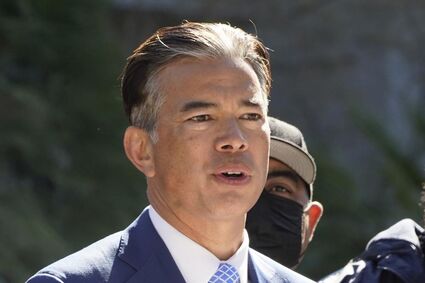 California Attorney General Rob Bonta speaks at a news conference at the Capitol in Sacramento, Feb. 23. Republican Nathan Hochman will battle California's Democratic attorney general in the November general election. Figures released Thursday, June 23, show that Hochman got 18% of the vote in the June 7 primary. Bonta won 54.8% and three other contenders were way behind. AP photo/Rich Pedroncelli, file photo

Republican Nathan Hochman will battle California's Democratic attorney general in the November general election after garnering 18% of the vote in the primary, according to figures released Thursday, June 23.

Hochman, the Republican Party's endorsed candidate, will face Rob Bonta in a state that overwhelmingly favors Democrats. Bonta, the only Democrat in the five-way field, won 54.8% of the June 7 primary, according to the latest figures from California's secretary of state.

Under state law, the top two vote-getters advanced to the November election, no matter their p...