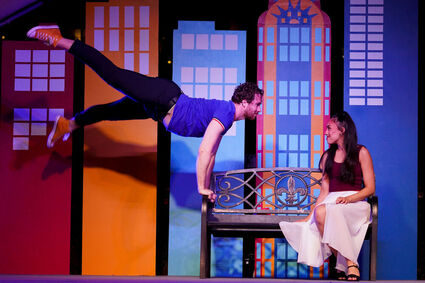 While Leonard Bernstein's life's work has graced Broadway over the decades, this particular show is an extrapolation of some of his most revered pieces. Conceived and arranged by legendary musician Rob Fisher, this is a nonstop tribute to the Bernstein team of lyricists, i.e., Betty Comden, Adolph Green, and Stephen Sondheim.

Yet locally, it is Jenna Ingrassia Knox's charming choreography that brings the many familiar songs to life. She has sprinkled the performance with sass and lightness all the way from Johnisa Breault's first battement to the finale's terre-á-terre as she escorts the audience down the Great White Way.

It is Knox's vision that is beautifully executed by co-stars Johnisa Breault and Trevor Rex. They breathe new life into these timeless tunes.

For one thing, Breault sparkles. Coupled with her sweet lilting voice and the fairy litheness of a prima ballerina, her performance is charming. She's delightful. She's wonderful. Oh, but wait, that's another lyricist, anyway.

Keeping pace with Breault is last year's Broadway World "Dancer of the Decade" recipient Rex. A San Diego favorite, Rex delivered Sondheim's "Maria" with passion and freshness. An accomplished singer/dance man, it is no accident that he is a local favorite.

Everything about this show is a treat to the senses, especially the band. Conducted by pianist Nina Gilbert, this talented quartet filled the night air with music featuring Rex Lycan on percussion, Ron Lycan, Jr. on bass, and Antwane Green on clarinet.

Rae Henderson-Gray selected costumes for the duo and Marcos Rico is the sound engineer.

Every production takes gobs of folks to carry it to an audience, and New Village Arts has a marvelous backstage team. Everyone deserves applause for this show.

Coming for one night only on July 17 is "A Midsummer Night's Soiree." Supported by Carlsbad businesses, the cocktail-dinner-dancing evening of fun also includes a live auction and performances. For details go to newvillagearts.org/annual-gala/ or call the box office at 760-433-3245.

If there was a downside to the evening, it was finding the Carlsbad Flower Fields for the first time. After a call to a friend, we learned it is under the Armstrong Garden Center on Paseo del Norte Drive. As Google turns you toward 5704 Paseo del Norte, it drops you at the south end of the outlet center and there isn't a sign or an arrow to direct you to turn right into the white fenced parking lot. The lot is gravel and dirt so wash your car after you get home.

Also be sure to take a wrap and a seat cushion for the folding chairs.

"Leonard Bernstein's New York" plays through July 31 at the Carlsbad Flower Fields. Check the website for performance dates and times at http://www.newvillagearts.org or call 760-433-3245. This outstanding show has earned a rating of 10 out of 10.

Meanwhile, at North Coast Repertory for one-night only is "What's in that Sexy Brain of Yours?" You won't want to miss a night of laughter and mind-blowing mystery, as De'Anna Nunez invites members of her audience to journey through their imagination in Hypnosis. Tickets will be snapped up, so get yours now at 858-481-1055 or NorthCoastRep.org.

Cygnet Theatre is opening July 13 with "Cabaret" in Old Town San Diego. Go early for parking and a bite to eat before the show. For tickets, call 619-337-1525 or visit https://www.cygnettheatre.com/. 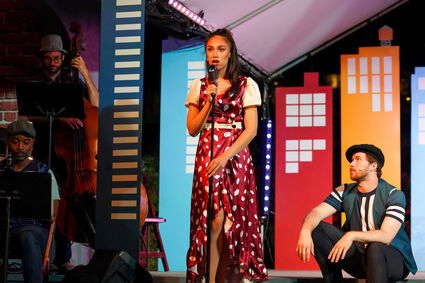 "On Beckett" explores the life of Irish writer Samuel Beckett and will play on the Donald and Darlene Shiley Stage in the Old Globe Theatre, part of the Globe's Conrad Prebys Theatre Center in San Diego's Balboa Park (1363 Old Globe Way). Performances run Thursday, July 14 at 8 p.m .; Friday, July 15 at 8 p.m .; Saturday, July 16 at 2 p.m. and 8 p.m., and Sunday, July 17 at 2 p.m. and 7 p.m. Tickets start at $30. For additional information, visit http://www.TheOldGlobe.org.

Coming to the California Center for the Arts in Escondido is "Witnesses, the Musical" opening July 15 closing on July 30. The unique story is told by five teenagers during the Holocaust. Tickets are available at 800-988-4253 or https://artcenter.org/.