Rattlesnakes are out and active 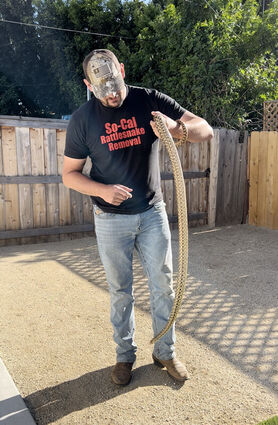 An expert on rattlesnakes, Alex Trejo holds one that is about as long as he is tall.

Southern California rattlesnakes are out and aggressive.

They started coming out in the spring and North County Fire Protection District has been out on many public service calls to remove them from residents' homes, garages and sheds.

According to NCFPD spokesperson John Choi, seven out of 10 calls for snake removals are rattlesnakes.

"We've flown a couple kids with bites to the hospital," he said.

Alex Trejo, of socalrattlesnakeremoval.com, has removed his fair share of snakes and has a keen understanding of them.