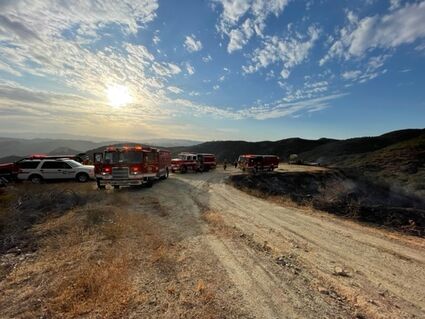 DE LUZ - A brush fire erupted today at the end of a dirt road in the unincorporated community of De Luz, scorching about an acre before Cal

Fire aircraft boxed it in during a series of drops.

The non-injury blaze was reported at 4:55 p.m. in the area of Patton and Gavilan Mountain roads, just west of Temecula, according to the Riverside

Multiple engine crews were sent to the location and encountered flames moving slowly through heavy vegetation, well clear of homes in the sparsely populated area, the department reported.

Three Cal Fire air tankers and two water-dropping helicopters were called in to make runs on the fire, slowing its advance, enabling crews to

begin establishing containment lines, according to officials at the scene.

As of 5:30 p.m., crews were making steady progress typing up gaps and closing off the fire's flanks.

There was no immediate word on what might have triggered the blaze.

UPDATE - The fire forward rate of spread has been stopped.

North County Fire Protection is on scene of a fire up at Gavilan Mountain and Patton Lane. The fire is currently at one acre and is not contained.

No structures are currently threatened.

The fire is under investigation.

We will update this story.