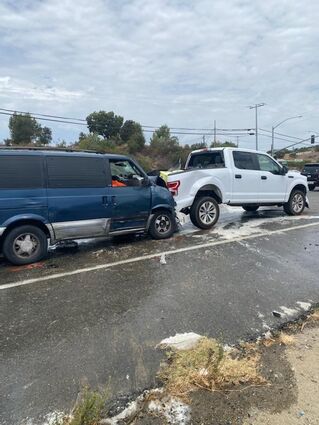 A three vehicle collision included one vehicle which was carrying pool chemicals and muriatic acid was spilled onto the street, creating the need for HAZMAT teams to respond.

NCFPD PIO John Choi said, "Both the county team and HAZMAT 2 from the City of San Diego, and CHP were able to mitigate the acid and scoop up all the material, neutralize it and make it safe for our community and the roadways will be opened shortly. Expect delays and it should be cleared in about 30 minutes. "

There were three total injuries from accident. One patient was transported to TriCity Hospital via an Oceanside ambulance and the other two adult patients signed against medical advice and refused to be transported.

HAZMAT is in route to a 3-vehicle traffic collision in Bonsall involving a vehicle that spilled muriatic acid onto the roadway. 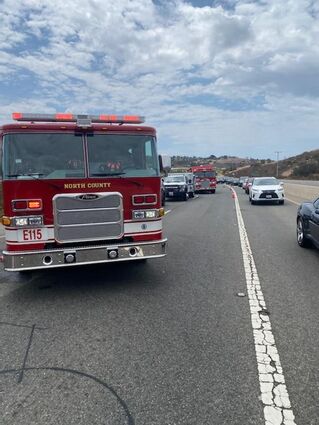 NCFPD responds to three-vehicle collision at Sr76 and North River Road. Both eastbound lanes were closed and traffic was diverted through the turn lane.

NCFPD is asking Motorists to keep their windows closed as they drive on SR 76 near the intersection of North River Road. One of the vehicles was carrying several gallons of muriatic acid which spilled onto the roadway creating a hazardous condition.

PIO John Choi said, "At 9:34 am the call came in as a traffic collision at SR 76 eastbound and North River Road in Bonsall. Lanes one and two are closed and traffic is slowly being redirected through the turning lane, however motorists are being asked to keep their windows rolled up because of the pool cleaning supplies, including muriatic acid, that spilled from one of the vehicles. He added that the HAZMAT HIRT (Hazmat Instant Response Team) has been called and is in route.

According to the CHP log the spill is contained in the roadway and no drains or water way is affected.