Murphy & Murphy turn over the keys 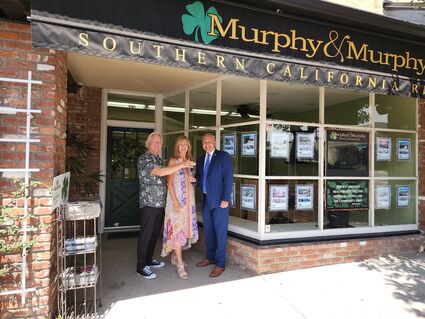 Murphy & Murphy bid farewell to their beloved Fallbrook. Their real estate brokerage has been sold to Tim Kirk, who will continue to run the business from the 130 N. Main Ave office location.

Kirk, a 9-year Fallbrook resident and retired U.S. Marine, was with Pacific Sotheby's International Realty for the past 7.5 years.

Kirk said he was interested in buying Murphy & Murphy because he believes they have the same values and run in some of the same circles. He shares the passion for supporting nonprofits in his community and assisting our military. "After working with an international brand, I thought it would be amazing to take that experience and embed it in a family brokerage in my own town," said Kirk.

Kirk said while his office with Pacific Sotheby's International Realty was in Carlsbad, he's sold quite a few properties in Fallbrook over the years, with about 20% a year coming from Fallbrook. Kirk said that although he loves working with all his clients, two years ago he and his teammate Mark Marquez really enjoyed listing the First Church of Christ Scientist Fallbrook on Fallbrook Street and representing the buyer, Calvary Chapel of Fallbrook, which rebranded as the Servant's Church.

Kim Murphy concurred that the training she and Chris Murphy also received in a larger brokerage (Prudential), before they created Murphy & Murphy, was a huge benefit. "It's exciting to bring that training and experience to a small family brokerage," she said. "Our clients receive the best of both worlds; the professionalism and training that a large brokerage offers, side by side with the warmth and personal interaction that a family-owned brokerage brings."

Kirk, his wife Kristi and two children decided to settle in Fallbrook nine years ago after completing his last tour at Quantico in Virginia. They also lived in Kansas City, Missouri, and several other places across the country, moving every two to three years. Their two kids, Paige and Dalton, both graduated from Fallbrook and Oasis High School. Dalton is now in the Marines, stationed in 29 Palms, California, following in dad's footsteps. Paige is also a licensed real estate agent in Kansas and Missouri.

The last 12.5 years of his military career was in prior service recruiting. When asked how they found Fallbrook, he credits his wife for the choice. "I had told her to pick the town where we would move. She had never been here, but liked the small town feel of what she had seen online. She found a house listed for rent in Peppertree Park, which was owned by another retired Marine. The landlord didn't even require an application since we were both retired Marines, and the rest was history."

Kirk is very passionate about the Gary Sinise Foundation which builds homes for injured veterans and first responders, among other things. He said he was honored to sit down with Gary Sinise in 2013 at the Naval Hospital and was asked if he could help them find vacant land to purchase so they could build specially adapted smart homes for severely injured veterans that are built specifically for the veteran's individual needs. The first two veterans Kirk worked with at the foundation now live in Fallbrook. He said the Gary Sinise Foundation turned over the 78th home nationwide just last week in Vista on land Kirk helped them purchase. Currently, he is on the search for land to build another one in Southern California.

Kirk, who has his MBA, says this is just one of the nonprofit organizations he supports. "I prefer, especially in a small town, the nonprofits I support are run properly and have oversight, and we can be confident the money is going to the intended purpose." He's a lifetime member of VFW Post 1924 in Fallbrook and supports the Fallbrook Food Pantry as well.

Chris Murphy said they chose Tim Kirk as the person to buy their brokerage because they were impressed with his commitment to local nonprofits which support the community overall. Kim Murphy believes Kirk has the same ideals and like-minded values. She said they have been impressed with him over the years and respected him as an agent that worked every day and was dedicated to the care of his clients.

"It's tough to turn over something that we've built over the last 10 years. It's important to have someone with the same integrity, same values, and same work ethic. Then you must question, what kind of business model they have? Are they going to take care of clients like we have? We aren't the same people, but we come from the same background. All three of us worked with Steve Games, previously CEO of Prudential and Pacific Sotheby's International Realty. Steve was passionate about the real estate business. We have that passion, and we know Tim brings that passion too."

Kirk is bringing with him Jessica Cruz who has been his Director of Operations for the past five years. They met each other nine years ago when Kirk started working in real estate with his first boutique real estate brand.

Kim Murphy will continue to be the broker of record for the next couple years, but the day-to-day operations will be the new owner, Tim Kirk. "She will provide the oversight, but I will have my feet on the ground taking care of the business and clients," Kirk said.

Kim Murphy said, "It was our intent to retire and just move away, but after talking to Tim it was agreed that I would continue to be the broker of record," Chris Murphy will also keep his license under Murphy & Murphy in an "Emeritus" status.

The Murphy's are moving to Chattanooga, Tennessee after a two-week vacation seeing sights across the country. They have also purchased a home in Costa Rica where they plan on spending six months a year.

Chris Murphy said, "We are going to be able to enjoy retirement, hiking, walking and enjoying the arts, food, wine and the whole vibe and music, in Chattanooga." Then in Costa Rica, Chris said Kim will enjoy yoga and he will enjoy surfing.

After living in Fallbrook for 30 years, they said there's a lot of people and nonprofits that are special to them and that it takes time to recreate in a new town. "I will miss the ability to walk out the door and know exactly what we are going to do and miss the people we run into all over town. We will miss the adrenaline rush you get in real estate. We'll mostly miss all the great people that we've grown close to over the years." Chris Murphy said, "I agree, it's the people we are going to miss the most."

Kirk, who is also a licensed Military Relocation Professional is excited to build upon what the Murphy's have started and continue his journey in his own town.