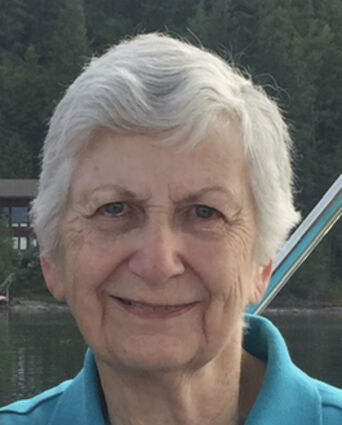 Janice Alice Enger, born September 17, 1931, in Corvallis, Oregon, passed on July 18, 2022. Janice had a quiet elegance. She was never one to criticize and treated all she met with kindness. Janice met Don Enger in Deer Lodge, Montana while working as a switchboard operator. They would marry in 1955 and raise three children in Belmont, California.

Janice was a homemaker who enjoyed gourmet cooking, crossword puzzles, novels and good times with family and friends. (She played the piano for many sing alongs). She was an avid sports fan, always working the concession stand during her two boys games. In 1989, Janice became a ham radio operator, allowing her to communicate with her daughter who was sailing foreign waters.

Don and Janice retired to Fallbrook, California where Janice volunteered at the Fallbrook Hospital and the Bottom Shelf. Even at 90, she faithfully attended exercise classes at the Fallbrook Community Center.

Janice was preceded in death by her husband Don in 2012 and her youngest son, Gregg, in 2022. She leaves behind daughter Teri Southworth, son Tom Enger, granddaughters Amanda and Elizabeth and great-grandchildren Kimber, Weslee and Lynkon.