Patient transported to hospital after rescue traffic collision on I-15 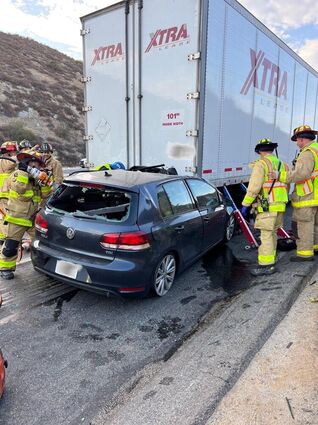 NCFPD is on the scene of a rescue traffic collision on NB I-15. Lanes 3 and 4 are presently blocked. 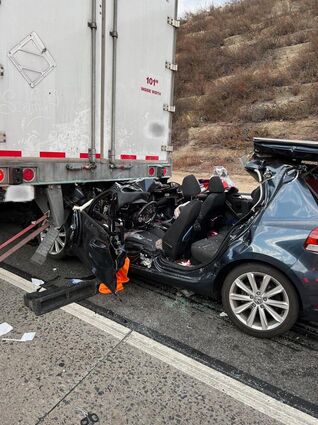 What was left of the vehicle after one adult patient was extricated and transported to Palomar Hospital.

North County Fire Protection District firefighters responded to rescue traffic collision on NB 15 Freeway just north of Mission Road in Fallbrook on Wednesday August 3, 2022, at 6:20 pm. NCFPD crews arrived on scene at 6:28 pm to find a Volkswagen Golf TDI involved in an underride crash. This vehicle collided with the rear end of a semi-truck trailer resulting in the driver being trapped. NCFPD performed vehicle stabilization, auto extrication, and provided advance life-support care to the solo patient. The patient was extricated and transported to a trauma center with life-threatening injuries. North County Fire Protection District responded three engines, one ALS ambulance, and a Battalion Chief. NCFPD was assisted by Cal Fire USAR 12 and Battalion 1.

A patient with life-threatening injuries was transported to Palomar Hospital after being extricated from their trapped vehicle under a semi-truck. NCFPD was called to the scene at 6:20 pm on Wednesday, August 8th.

The expanded traffic collision and rescue happened on NB I-15 just north of Mission Rd. according to NCFPD PIO John Choi.

This is a breaking news story. More information will be reported as it becomes available.