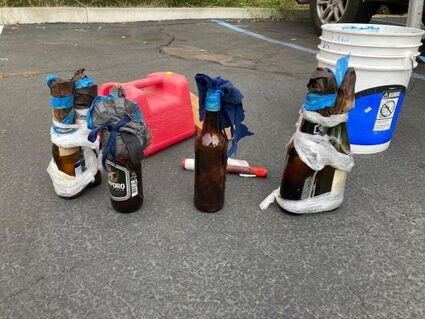 A man is in custody today after deputies found him with Molotov cocktails or handheld firebombs.

It happened on Tuesday, August 23 just after 8:30 a.m. when deputies with the Fallbrook Sheriff's Substation responded to reports of a man acting suspiciously in the 200 block of East Fig Street in Fallbrook.

During a search of Oberg's car, deputies found six Molotov cocktails, a flare and a container of gasoline. Sheriff's Bomb/Arson, as well as the Federal Bureau of Investigation (FBI) responded to the scene. They rendered the devices safe.

Sheriff's Bomb/Arson served a search warrant this afternoon at Oberg's apartment in the 33000 block of Jamieson Street in Lake Elsinore. The San Diego County Sheriff's Special Enforcement Detail (SED/SWAT), as well as FBI and Bureau of Alcohol, Tobacco, Firearms, and Explosives (ATF) agents and the Riverside County Sheriff's Department assisted with the search.

No intended target has been identified by detectives. The investigation is ongoing.

Oberg was booked at the Vista Detention Facility on six additional felony charges of possessing an explosive device in public. His bail is set at $600,000.