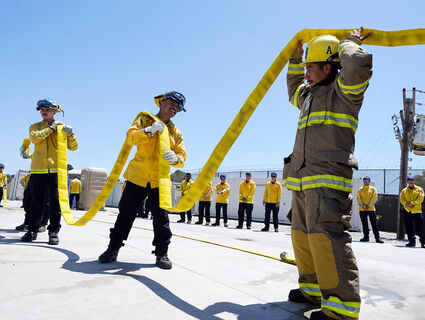 Cadets, who were formerly-incarcerated firefighters, train at the Ventura Training Center (VTC) during an open house media demonstration Thursday, July 14, 2022, in Camarillo, Calif. California has a first-in-the nation law and a $30 million training program both aimed at trying to help former inmate firefighters turn pro after they are released from prison. The 18-month program is run by Cal Fire, the California Conservation Corps, the state corrections department and the nonprofit Anti-Recidivism Coalition at the Ventura Training Center northwest of Los Angeles. (AP Photo/Damian Dovarganes)

SACRAMENTO, Calif. (AP) - As wildfires rage across California each year, exhausted firefighters call for reinforcements from wherever they can get them - even as far as Australia.

Yet one homegrown resource is rarely used: thousands of experienced firefighters who earned their chops in prison. Two state programs designed to get more former inmate firefighters hired professionally have barely made a dent, according to an Associated Press review, with one $30 million effort netting jobs for just over 100 firefighters, little more than one-third of the inmates e...