Man arrested after assault at Rite-aid

Sheriffs detained and arrested an unnamed man after an attack in Rite-Aid. 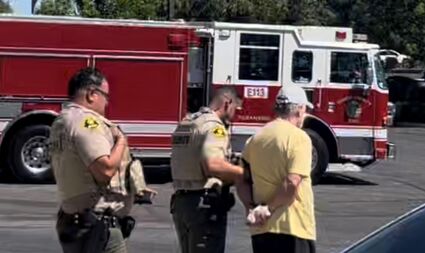 A man is led away by deputies after an altercation in the parking lot of Rite Aid.

After an altercation in the parking lot of Rite Aid, Wednesday morning, Aug. 31, one man was treated for a gash on his arm by North County Fire paramedics on scene. According to witnesses, the other man, who had a bloody nose, Jerry Eyler, 69, was arrested and taken away by deputies. He was charged with assault with a deadly weapon, not a firearm. No witnesses to the altercation were found.

At 10:32 a.m. this morning a call came in as an assault with a deadly weapon. Fallbrook Sheriff's deputies responded. A man was arrested according to bystanders. San Diego Sheriff Lt. Roller in Media Relations said, "There was a person with a cut on his arm and a person with a bloody nose. Somebody went to jail. That's all we know right now." He wasn't sure if the bloody nose and cut were on the same man or two different men. It appears someone was attacked in Rite Aid. This is a developing story and more will be reported as information becomes available.