Rasp Gale looks back at 99 years with joy 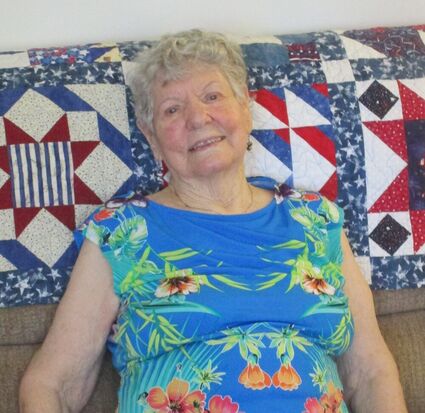 Marilynn Rasp Gale celebrated her 99th birthday, Monday, Aug. 29, with a small family get-together and birthday cake after her usual late afternoon nap. Her husband, Ernie Gale, is six months younger, so he won't turn 99 until next year. They've been married for 21 years.

She met Ernie at 24 Hour Fitness where they were in the same class for five years. After his wife and her husband died, they got to know each other. She asked him to go on a cruise with her, but he declined, remembering when he was on a troop ship in World War II. Eventually she changed his mind and they went on 13 cruises together. They lived in Lake Elsinore when they weren't traveling.

Their last trip was driving all the way to Portland and back, 2,700 miles round trip, "a couple of 90 year olds with a dog," she said. There they visited her brother Thomas who is now her last surviving sibling and will be 88 in December. There were 10 siblings in the family; they lost one brother and one sister in the past year. Marilynn and Ernie have lived in Rainbow for close to five years now.

When asked if there is a secret to her longevity, she said no, but "trying to keep up with five boys was a challenge." She married her first husband when she was 17 and they were married for 59 years. They had five sons, Dick, Steven, Fred, Alan and Bill.

The family lived in Fallbrook from 1948 to 1973; with the boys all out of school, they moved to Fort Jones, eight miles from the Oregon border. She returned to Fallbrook every three weeks because she missed her boys and, after four years of snow, her husband decided they would move back to Southern California so he could grow avocados.

They bought a place in Rainbow in 1977 and three of their sons still live in Rainbow, (one in Hesperia and one in Belize.) She also has 10 grandchildren.

Two years ago, Marilynn had pneumonia and was in the hospital right before Covid hit, so Ernie lived with his daughter for a while. Once home herself, Marilynn missed her husband, so she arranged for in-home help and brought him home, she said.

Just a month ago, they both came down with Covid. Marilynn, who has had a pacemaker for 12 years ("the battery is good for another year and a half," she said), is fine now. Ernie had it much worse but is okay now, she added. He has an oxygen tank when he needs it and is taking Prevagen which perks him up, according to his wife. And they have a 24-hour caregiver to look after the two of them.

While she doesn't get out much anymore, "Traveling opened up my whole world, with knowledge and meeting new friends," she said. She still has a photo from her first cruise (to the Mexican Riviera) hanging on her living room wall.

In summing up her 99 years, Marilynn said, "Ernie is the love of my life. We are joyful every day we are together."