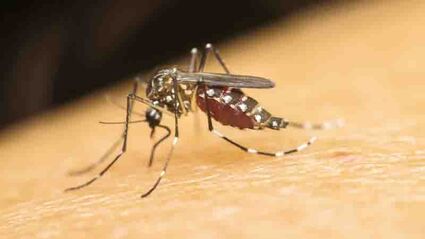 The invasive Aedes aegypti mosquito is diurnal, meaning it feeds primarily during the day. Village News/Photo courtesy of Brent Casey

Mosquitoes are a worldwide pest, spreading disease and making animals and people miserable with their high-pitched buzzing and itchy bites. Southern California is no exception, but there is a sinister invasive species of mosquito that bites in the daytime and lays eggs that are drought resistant to some degree.

"The mosquito's scientific name is Aedes aegypti," he said. "It's an invasive species that has spread throughout the State of California. A couple of features of this mosquito that people are not used to are that it is a day-biter and can bite multiple times."

According to Casey, this daytime feeding behavior catches people off-guard, as mosquitos most typically feed at night.

"It's not just an issue for Southern California, it's a problem for the entire state. It is not exclusive to the mountain communities, the deserts or coastal regions," he said.

The Riverside County Department of Environmental Health Vector Control Program states that there are about 24 species of Aedes mosquitoes that occur in California. They lay single eggs on intermittently flooded surfaces such as the damp soil around irrigated pastures and fields, along the edges of coastal tidal marshes and inside containers. The eggs are extremely resistant to drying and will lie dormant on dry surfaces until flooding occurs. This can lead to many generations of eggs in a given habitat if female mosquitoes lay successive batches of eggs before the area is flooded.

Large numbers of eggs hatch spontaneously and develop rapidly into adults. Since the female insects lay eggs that can remain dormant in a dry area for some time, and hatch the next time there is water present, they can reproduce even in drought conditions. Aedes aegypti typically breed from April through September, when the weather is mild and warm.

"They are very adaptive that way," Casey added. "They can reproduce in a cap-full of water."

Typically, the Aedes mosquitoes found in California will not enter buildings and homes; however, they are strong fliers and are known to travel many miles from their aquatic developmental sites to search for hosts. Aedes mosquitoes are diurnal, active during the day, during mild weather, especially around shaded areas, but will also bite at dusk. Most Aedes females feed on large mammals like cattle and horses, but will readily feed on humans. They are aggressive and persistent biters.

The invasive Aedes aegypti expands the potential for mosquito-borne diseases and even new varieties of diseases, according to Casey.

The mission of the Vector Control Program is to foster a healthy community by protecting the residents of Riverside County from animals and insects that transmit pathogens that cause illness. Vector Control personnel also respond to complaints throughout the unincorporated areas of the county and in cities with contracts to provide identification, consultation and abatement services.

Some mosquito species are not vectors, but their bites are still annoying. Controlling mosquitoes is critical to maintaining both a high quality of life and protecting people from mosquito-transmitted diseases such as West Nile virus.

According to the Riverside County Department of Environmental Health, mosquitoes are the most dangerous animals on the planet. The disease-causing organisms (pathogens) they transmit (vector) through their bite kills more people and wildlife than all other animals combined. Mosquitoes are found on every continent except Antarctica.

Mosquito larvae breathe air from above the water surface and dwell at the surface of the water while feeding on organic matter. As they develop, mosquitoes go through a non-feeding stage called a pupa after which they emerge as the winged adult form, like a caterpillar in a cocoon turning into a butterfly.

All adult mosquitoes feed on plant nectar; however, the female must have a blood meal to produce eggs. To obtain blood, the female's mouth parts pierce the skin of her victim, inject saliva and suck blood out. It is through the injection of saliva that a mosquito causes the typical itchy bump and can possibly infect a person or domestic animal with a disease-causing organism.

● Examine outdoor areas and drain temporary and unnecessary water that may stand longer than 96 hours.

● If possible, drill drainage holes, cover, or invert any container or object that holds standing water that must remain outdoors. Be sure to check for containers or trash in places that may be hard to see, such as under bushes or buildings.

● Change water in birdbaths, fountains and animal troughs at least once per week.

● Ensure rain and/or irrigation water does not stand in plant containers, trash cans, boats or other containers on commercial or residential properties.

● Regularly chlorinate swimming pools and keep pumps and filters operating. Unused or unwanted pools should be kept empty and dry, or buried.

● Maintain irrigation systems to avoid excess water use and runoff into storm drains.

● Minimize sites mosquitoes can use for refuge by thinning branches, trimming and pruning ornamental shrubs and bushes and keeping grass mowed short.

Mosquito management can also include the use of Mosquito fish (Gambusia affinis) in bodies of water or large livestock water troughs, and the county will even provide these beneficial fish to homeowners at no cost. The tiny creatures thrive on eating mosquito larvae and pupae. They are well adapted to live in artificial ponds and containers but should not be released into natural areas such as lakes or rivers. Vector Control will also remove any excess mosquito fish and supply them to other sources in need of mosquito management.

Extra efforts by homeowners can help prevent these insects from being successful in their areas. For the Aedes aegypti mosquito, it is important to scrub out water containers such as dog bowls, livestock troughs and birdbaths when changing the water, in order to totally eliminate the eggs.

Eradication and control of these pests needs to be a neighborhood effort, stressed Casey. Residents have a big responsibility in controlling this invasion.

"The public plays such a large part in the control of mosquitoes," he said. 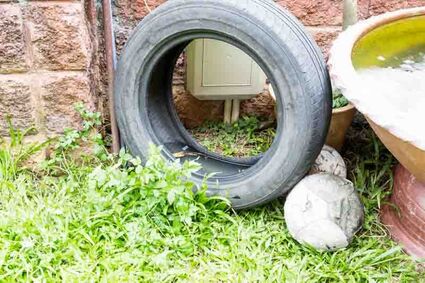 Additionally, the California Health and Safety Code says that landowners in the state are legally responsible to abate a public nuisance arising from their property, including mosquitoes.

A walk around your property to search out potential stagnant water will go a long way in helping control and eradicate these annoying and potentially dangerous pests from our neighborhoods, ranches and outdoor recreation areas. If you see a potential mosquito breeding site off your property, please report it to the Vector Control Program in your county.

Diane Sieker can be reached by email at [email protected]