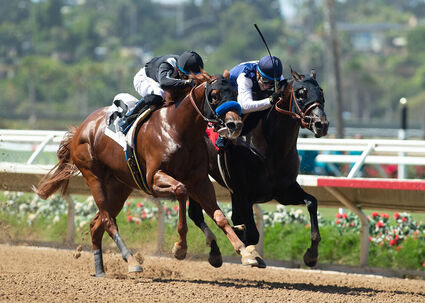 The ridgling never trailed in the one-mile dirt race for 3-year-olds and won by a nose over High Connection, who finished 10 1/4 lengths in front of third place Newgrange.

"It was a hard-fought race," said Paula Capestro, who is Go Joe Won's trainer. "It was a match race from the beginning by the two runners."

Capestro and owner Eric Hurst then entered Go Joe Won in a one-mile dirt race Aug. 4 at Del Mar. Go Joe Won had a winning time of 1:37.58 and finished a head in front of second-place Hero Status.

The Aug. 4 win made Go Joe Won ineligible to compete in any more maiden races for horses who have not won a race. Capestro and Hurst sought another race and nominated Go Joe Won for the Shared Belief Stakes.

"The racing office encouraged me to enter," Capestro said. "I looked at it and felt that there was a possibility he could be competitive in it."

That assessment was based on potential rather than history. "He was the least accomplished horse in the group," Capestro said.

Newgrange had three wins, including two in stakes races, in his four previous starts. Il Bellator, who finished fourth Sept. 3, had three previous wins including a stakes race. Armagnac, the fifth-place horse who is also trained by Baffert, had two previous wins.

"They all had a very good chance. They're all horses who have earned good prizes," Capestro said. "It was a tough group of horses."

Winning against Hero Status showed the ability of Go Joe Won to race against quality competition. "He broke his maiden in his previous race against a good horse who came back to win by five in his next start," Capestro said.

Hero Status won by more than five lengths Sept. 2 at Del Mar. The actual margin of victory was 6 1/4 lengths.

At 21.4:1, Go Joe Won was the longshot in the Shared Belief Stakes. High Connection went off as the favorite with 0.9:1 odds.

Bettors may also have been wary about Go Joe Won because he had the inside post position and was at risk of being boxed in. Ironically Go Joe Won also had the first post position in his Aug. 4 win. Jose Valdivia, who has been Go Joe Won's jockey for all five of the horse's races, took Go Joe Won to the front as soon as possible.

"When you're in the 1 hole you have to go, so it's not like you have a lot of choices," Capestro said.

Baffert is one of three trainers to win horse racing's Triple Crown twice, and in both the 2015 Belmont Stakes with American Pharoah and the 2018 Belmont Stakes with Justify, the Triple Crown was secured when Baffert's horse took the early lead and stayed in front. "Any time you run against Bob, you've got to go. Bob does not wait around," Capestro said.

Catching up with other horses in a stakes race is also a difficult task. "When you're in a stakes race you have to be very aggressive. You can't sit around and wait for things to come your way," Capestro said.

High Connection passed Newgrange for second during the first two furlongs, and after a quarter of a mile High Connection was half a length behind Go Joe Won and two lengths in front of Newgrange. That part of the race took Go Joe Won 21.89 seconds.

Go Joe Won needed 45.14 seconds to travel the first half of a mile. He also led High Connection by half a length at that point.

High Connection and Hernandez narrowed the margin to a head three-quarters of a mile into the race. Newgrange was three lengths behind High Connection at that point, and 1:10.82 had elapsed when Go Joe Won reached the marker.

"I think what made it thrilling was that match race," Capestro said. "They battled each other for quite a while."

Go Joe Won entered the stretch 1:24.00 into the race and had a half-length lead over High Connection, who was seven lengths ahead of Newgrange.

Hernandez was able to move High Connection alongside the leader, but Go Joe Won prevailed by about an inch. "He won the head bob," Capestro said. "The other horse never got in front of him."

"He waits on other horses," Capestro said. "He's very competitive and aggressive."

The two horses had made contact with each other. A stewards' inquiry delayed the declaration that Go Joe Won was the winner. The stewards' decision allowed the victory to stand.

"The stewards ruled that it was equal, that neither horse stopped the other horse," Capestro said. 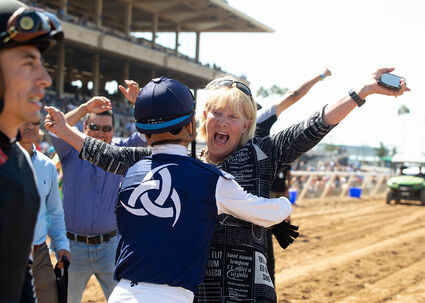 Capestro does not dispute that contact occurred. "They were brushing up against each other," she said. "High Connection sort of knocked into Joe first and then Joe knocked into him next."

Baffert was supportive of the stewards' decision. "Bob Baffert was very gracious. He sent a text, a very nice text. He said, 'Congrats, right call, happy for you,'" Capestro said.

"Either horse could have won it," Capestro said. "Our horse ran a beautiful race."

Hurst was joined in the winner's circle by his mother and cousin. In addition to a trophy they were presented with roses and champagne.

"We had a terrific day," Capestro said. "We were lucky enough to go to the winner's circle."