UPDATE: GO FUND ME has been set up for Mayra Mejia family

Mayra Mejia Jimenez is pictured at Main Street Cafe in Fallbrook. Jimeniz was killed in Vista during an altercation with a man outside a restaurant.

A Go Fund Me has been set up by Mayra's daughter, Cristina Mejia: https://gofund.me/7e65b94f They are trying to raise $25,000. Gina, from Main Street Cafe is encouraging people to donate to the fundraiser.

A 41-year-old woman killed in Vista last Wednesday night has been identified by friends as Mayra Mejia Jimenez, a Fallbrook woman.

The San Diego Sheriff's Dept. reported that an autopsy was completed and while it was confirmed to be a homicide, the preliminary cause of death is pending, as of Oct. 17.

"A suspect has been identified in this case, but that information is being withheld for investigative reasons at this time," according to an SDSD press release.

Mayra is remembered by many friends and family. Her Fallbrook employer was Main Street Cafe owner Gina Stavrakis. She said of Mayra, "She was a hard-working single mom. There wasn't a person who came across her that wasn't affected by her smile.

She was a ray of sunshine to all the customers and everyone she came in contact with, and such a hard worker.

She was a busser, but she would help anyone with anything. She was always on time and there was nothing that wasn't her job. She didn't even have to be asked, she would just do it. She was so amazing. She will really be missed by us and the customers."

Jimenez passed away at the hospital last Wednesday night, Oct 12 after being brutally attacked.

Deputies found Jimenez at the scene with signs of trauma to her upper torso. The weapon used is still unknown.

NBC Channel 7 reported that Jimenez was with a Hispanic male at a restaurant where they were eating and there was a fight reported outside afterward. 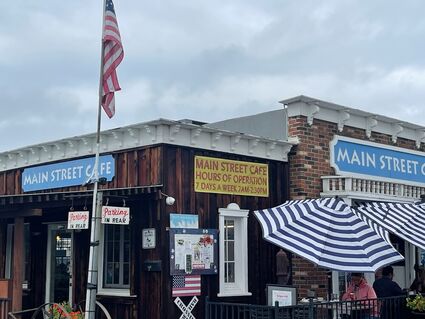 According to NBC, Lt. Stephan reported that several people inside a restaurant and in the parking lot told detectives they witnessed the fight and were aiding in the investigation.

According to Lt. Stephan, the male companion appeared to be 38-45 years of age but it's unclear his relationship with Jimenez and if he was involved in her killing. However, it does appear that as of Monday, Oct. 17, this man is the main suspect.

Anthony Campbell of AC Investigations, Hannah Hanford, Julie Reeder, and City News Service contributed to this story. When a GoFundMe is set up for Mayra Jimenez's children, Village News will update the story.