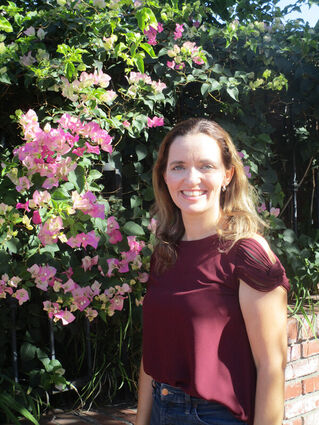 Maria Bergandi is an ICU nurse who lives in Bonsall. Village News photo

Maria Bergandi was in the right place at the right time. She had the experience – being an ICU nurse and a mom – to become a heroine.

The place was Bates Nut Farm in Valley Center. The date was Friday, Oct. 21, in the afternoon.

The Bonsall woman was with two friends and nine children – three of hers. As she wandered through the pumpkin patch, there was some commotion and people screaming for help. A little boy, a toddler, was having difficulty breathing.

Whether it was the nurse's training, ICU experience at Scripps Hospital in Encinitas, or being a strong mom, Bergandi sprang into action.

"The toddler rolled his eyes back and started turning blue," she recalled in a phone interview after a friend contacted the Village News. "I don't know where it came from, but I yelled, 'does anyone have a straw?"

It was a hot day, and someone had a straw in their drink.

"I used the straw to suction the kid's throat because it was fully occluded with secretions," she explained.

The toddler, under two, she estimated, started to breathe normally. Paramedics came and transported the youngster to Rady Children's Hospital in San Diego. She heard he had a temperature of 104 degrees.

Bergandi wasn't recognized at the time. She reconnected with her children and went on with their day.

Was using the straw something she was taught or experienced?

"No," she said. "I went to nursing school at the University of Nevada, Reno and no, we didn't talk about it in school and it's not something I've seen done at Scripps."

"The training definitely helped with assessing what was wrong," she added.

The toddler's family never reached out to thank Bergandi, likely wrapped up caring for their boy and not knowing how to reach the nurse. With HIPAA laws, the Village News was unable to find the family.

But Maria Bergandi is a heroine.

And she's feeling fine after sucking some "nasty" stuff into her mouth.

"Yes, I am still feeling OK," she said five days after the quick thinking and action. "I'm taking vitamins and stuff just in case."

Editor's note: Bergandi also said that the toddler's name is Nico which is also the name of one of her sons.