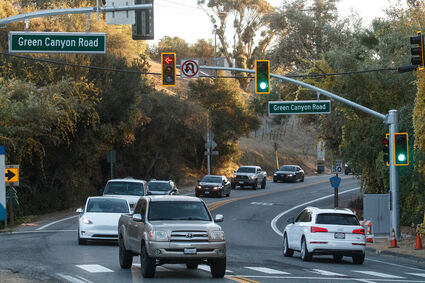 The signal at Green Canyon and South Mission went live on Tuesday, Nov. 22. Travelers into town were caught in the new traffic sometimes as far south as Hwy 76 and Bonsall's River Village.

After eight years in the process, the traffic light on South Mission and Green Canyon went active on Tuesday, Nov. 22. Community requests to have a signal at Green Canyon stemmed from multiple accidents and deaths at the intersection.

The proposed signal at Green Canyon and South Mission Road was first slated to be discussed during a Department of Public Works (DPW) Traffic Advisory Committee (TAC) in December 2014 but was pulled off that agenda to allow the Fallbrook Community Planning Group to provide input. Although the intersection met signal warrants in 2014, the planning group was concerned about potential adverse impacts to the traffic flow and recommended that the DPW consider potential alternatives to signalization.

Two years later, on Oct. 28, 2016, the county's TAC recommended that the intersection of South Mission Road and Green Canyon Road be placed on the county's Traffic Signal Priority List. Caltrans passed the project with eight members present and voting in support of the signal, which sent the proposal to the county board of supervisors for a final vote.

On Jan. 11, 2017, the supervisors added the Green Canyon/South Mission Road project to the list of intersections where traffic signals would be installed when funding and design issues allowed.

This added the signal to the Traffic Signal Priority List, which is based on priority points rather than the length of time on the list determining the next intersection to be signalized when funding becomes available.

During that Jan. 11, 2017 Board of Supervisors meeting, Jeannine Huffman spoke about losing her father in an accident at that intersection.

Village News reported that on the morning of Dec. 15, 2016, Bonsall resident Patrick Germon was killed when he attempted to make a left turn from Green Canyon Road onto South Mission Road and was hit by a vehicle traveling along South Mission Road.

"We ask that you pass it for Fallbrook," said Huffman. "We've lost too many lives."

Germon and his wife, Elizabeth, had been married for 45 years. "This is something not only for us, but anybody who goes there," Elizabeth Germon said. "There are quite a few people in Fallbrook that are very concerned about this."

Huffman informed the supervisors that two additional accidents at that intersection occurred after her father's death.

The traffic signal at Green Canyon has caused many traffic backups, sometimes from the signal all the way down to River Village and Hwy 76.

The next story will include what DPW is doing to calibrate or set the timing on the signals to decrease traffic on South Mission.

Most of the information in this story was taken from several stories over the last eight years by award-winning journalist Joe Naiman who covers county issues for the Village News.