Freaney and Friends offer free concert at the library 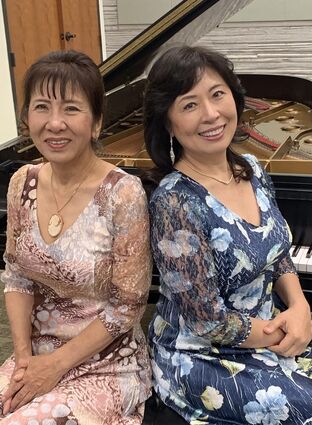 FALLBROOK – The Freaney and Friends free Christmas recital will be Tuesday, Dec. 20 at 1 p.m. in the Community Room at the library. The concert will be Elegancia Doble with Naomi Hobbs and Yumiko Oya assisted by Ephraim Reitman on percussion. They will present a piano four hands program mix of holiday tunes along with classical favorites.

Elegancia doble, as a duo, won the first prize at the 17th Japanese Musician's Association of California Piano competition in 2016. The program will include "Russian Dance 'Trépak'" and "Dance of the Candy Fairy" by Tchaikovsky, "Sleigh Ride" by Leroy Anderson, "Samba Triste" from Four Piece Suite by Richard Bennett, "Ballade No.1 Op. 23" by Chopin, "Dedication" (Widmung) by Robert Schumann-Franz Liszt, "Merry Christmas Mr. Lawrence" by Ryuichi Sakamoto, "Winter in Buenos Aires" by Astor Piazzolla, "Libertango" by Astor Piazzolla and "Duet Fantasy on Jingle Bells" by James Pierpont.

Oya grew up in Tokyo, Japan. After moving to the U.S., she began studying music theory at Orange Coast College. She was invited to play, as a soloist, "Beethoven's Piano Concerto No.4" with its orchestra at their annual concert. Further study earned Oya her Master's degree in Piano Performance at the California Institute of the Art. Since then, she has been active playing the piano, in concerts, collaborating with a local orchestra as a soloist, and teaching privately.

Hobbs earned her Music degree at the Musashino Academia Musicae in Tokyo. In 1998 she performed Rachmaninoff's "2nd Piano Concerto" with the Kanagawa Philharmonic Orchestra. She was the instructor of Music and Piano class at San Diego Community College for 10 years. She was the first prize winner of the 7th International Piano Competition in Mexico in 2012 and the gold medalist of 6th Seattle International Piano Competition in 2015.

The concert is supported by the Friends of the Fallbrook Library. The library is located at 124 S. Mission Road.

Submitted by Friends of the Fallbrook Library.