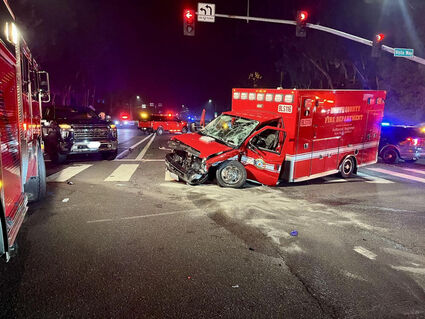 A NCFPD ambulance is struck by an SUV involved in a police pursuit Christmas Eve.

Two North County Fire Protection District (NCFPD) EMTs were transported to the hospital Christmas Eve with non-life-threatening injuries after the NCFPD ambulance they were driving was struck by a vehicle in a police pursuit. There was no patient in the ambulance as it was responding to a non-emergent automatic aid medical call to Oceanside.

The ambulance was traveling through a controlled intersection and was struck by the vehicle at College Boulevard and Vista Way on December 24th, at approximately 8:13 pm by the driver who, according to PIO John Choi, ran a red light being pursued after a domestic call.

Deputies from the San Diego County Sheriff's Department were called to a home on Casa Bonita Way in Vista at about 8 p.m. Saturday, where a

suspect fled the home in an SUV and was pursued by deputies, an OFD battalion chief said.

The suspect suffered a broken wrist and abdominal injuries. The suspect and two paramedics in the ambulance were taken to a trauma center.

Sheriff's officials were investigating the incident.

Fire Chief, Keith McReynolds: "I am thankful our two members only sustained minor injuries, and our thoughts are with everyone involved"