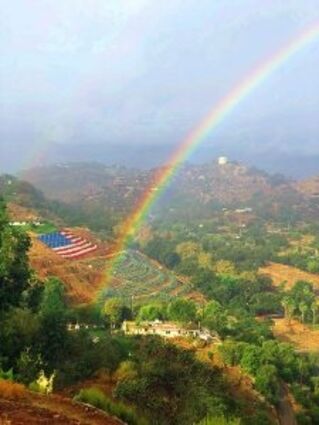 A rainbow shines over the flag on the Daily family ranch in De Luz Saturday, Nov. 7, 2021, in this photo from Jonathan Arbel.

SAN DIEGO (CNS) - With rainfall set to start as soon as tonight in San Diego, the extended forecast for it to continue throughout the rest of the week and beyond, according to the National Weather Service.

``We do have a chance of rain every day for the rest of the week in San Diego,'' said NWS forecaster Elizabeth Schenk.

Heavier rain and strong winds are forecast as part of a stronger Pacific storm system expected to impact the Southland Wednesday through Thursday.

``The next big storm system will fall a lot of the day on Thursday,'' Schenk said.

Clouds were thickening Monday with partly and mostly cloudy skies expected to blanket the Southland Tuesday, growing denser as the frontal system over the eastern Pacific approached the area. In general, most areas will see a half inch to an inch of rain Monday and Tuesday, according to the NWS. Snow is likely for the higher elevations.

SoCal remains on track for a powerful storm system to affect the area starting Wednesday and continuing through Friday, forecasters said. The heaviest rainfall is expected to occur late Wednesday through Thursday morning.

Monday in San Diego County with surf 3 to 5 feet. She said new storm systems arriving the end of this week will have ``very high surf and potentially gale-force winds and will be very hazardous on Thursday and Friday.''

There will be yet another storm system moving through San Diego over the weekend and beyond.

``We will be having another storm coming in Saturday night into Sunday, and the long-range forecast is for a chance of precipitation through about two weeks,'' Schenk said. ``We are in a really active pattern right now.''

Health officials are warning people to avoid entering ocean water near discharging storm drains or rivers due to possible bacterial infection. A water contact warning issued Sunday for the Coronado shoreline by the San Diego County Department of Environmental Health and Quality remained in effect Monday.

Health officials note that stormwater runoff that reaches the ocean can carry bacteria, chemicals, debris trash and other health hazards. People who come in contact with impacted water in the ocean could become ill, health officials said.

Temperatures are expected to be cool throughout the week, with highs in the 50s and 60s in most areas.