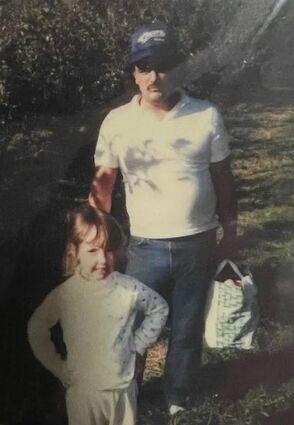 Father and daughter reflect on the first anniversary of their reunion.

The 37-year-old had been searching for her biological father, Rainbow resident Patrick McCarthy, for over 33 years.

Crosby, born in New Hampshire in 1985, had not seen her father since she was 4 years old. When she was still a baby, her parents, who never married, moved to Massachusetts to start over after her father lost his job. Her mother took a desk job in Boston. Her father, a master mechanic, also found work.

Happiness forever was not meant for the couple. Her mother wanted to settle down and start a family. Her father, a free spirit who wasn't ready to give up his rock 'n' roll lifestyle, wanted to do both.

It all went crescendo in 1989 when her dad stormed out of the house after her parents got into a fight. "I remember my mother taking me out of the house and her brother, who was a priest, came to pick us up, and then my father left," she said.

Even though she was a young child, she cherishes a few episodic memories of happy times with her father. She remembers her father laughing and joking at a birthday party in a large field and a man taking pony rides. She remembers visiting her father's friends in New Hampshire and riding a snowmobile, her father sitting behind her and holding her tightly as they rode through the woods.

Her mother eventually met a man, got married, and moved to St. Petersburg.

In addition to souvenirs, she began to receive letters, postcards, and small trinkets from Florida where her father was living at the time. He sent a picture of himself sitting on top of his motorbike, his long, shaggy hair starting to turn gray. The cards and letters stopped for a while, but one day in 1994 she received another postcard from her father, who lived in San Diego. "My mom always told me my dad was a wanderer," Crosby remarked. When she and her mother moved to another house in St. Petersburg, the letters again stopped.

Time passed, as always, but she still had questions that only her father could answer. As soon as the internet was born, her mother bought a home computer and she spent hours searching Yahoo for clues about her father. She created a MySpace account in hopes of connecting with him. She searched prison records and obituaries, Craigslist and genealogy websites.

What made an already difficult task worse was that she didn't know her father's exact age because he never gave anyone a clear answer and as a child he was in the foster care system bouncing from place to place, making it almost impossible to find an extended family. .

Last year, her mother found her baby book and inside, nestled next to her baby photos, was her family tree with her father's name and actual date of birth, the name of her biological father, Thomas McCarthy and his biological mother, Virginia Shaghalion.

Armed with this new information, she started her search again. A search of her grandmother's name turned up a Massachusetts obituary that listed a few biological children. She wrote them all letters and got a response from her great-aunt, but because they were placed in foster care at a young age, she had no information about her father. Even though she had discovered family members she didn't know she had, it was another dead end.

Then an email in November 2021 changed everything.

In a twist of fate worthy of a Hallmark original movie, it turns out that her father had hired Tony Campbell, a Fallbrook private detective, to look for her. Sitting in her car waiting for her husband to get out of Target, the email appeared with the subject "family." When she opened it, she learned that the private detective had been hired by her father to find her and wanted to know if she would be interested in talking to him.

"I was in shock, but immediately thought it was a scam," Crosby said. When her husband got back to the car, she showed him the email and asked if it could be real. He googled the man's name and verified that it was a real private investigation firm, AC Investigations.

She called the investigator as soon as she got home. He sent her a photo of her father and she immediately knew he was the man she had spent the last three decades trying to find. She agreed to speak to her father and a phone call was scheduled for the next evening.

When he answered her call, she noticed his Boston accent which was still thick even after living in California for so many years. He shared his story. He had struggled with alcohol abuse throughout his life, but had been sober for almost six years. He had traveled the country, been arrested for misconduct and lived in the Salvation Army. "He told me he hadn't reached out earlier because he was ashamed and embarrassed, but he didn't know I wanted to talk to him," she said.

Five years ago, while working in a shipyard, a boat fell on top of him, crushing his legs. As he lay alone in the dark for hours waiting for help to arrive, he worried that he would die before he had a chance to know if she was okay. After his broken body was discovered by colleagues, he endured nearly two years of hospitalizations, surgeries and physiotherapy sessions.

He offered to pay Crosby and her husband to travel to California for a visit. She readily agreed, eager to meet her father in person. They made the trip in January and landed at the San Diego airport at 2 p.m. By the time they rented a car, checked into the hotel, freshened up and grabbed a bite to eat, it was almost dark, but undeterred, they decided to meet him in Rainbow, a small town outside of San Diego.

It is dark at this time, but they see the lights of an ATV heading towards them. The car stops and she rolls down the window. One look at the man driving the vehicle and she knew it was her father. He approached her window and reached out to hug her. "It was wild and crazy in the best possible way," Crosby said.

Her father took them to his home and they spent time learning about their lives. He told her that his plan was still to find her, but only after he did something to show for himself. He apologized for not getting his life back sooner. Crosby was friendly. "I think he had to go through these tough things to be at a point where he could make a change," she said.

He showed her one of his most prized possessions, a boat he built in the 1990s but couldn't part with and named Miss Shannon. "I cried when I saw that," she said.

It's been a year since the couple met. Her dad still doesn't use technology, but they talk on the phone a few times a week. She is making plans for another visit in January.

Campbell, the private detective, also remains in contact with Crosby. "He tells me he deals with so many sad cases that don't have a happy ending and he wishes he could find another case like mine," she said.

Reprinted with permission of the Plant City Observer