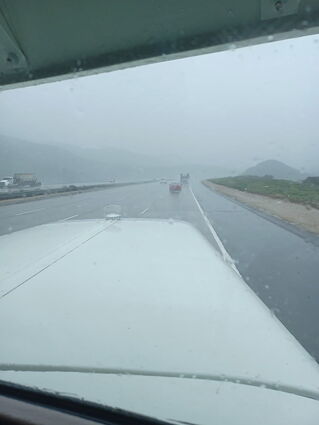 A truck braving the rain on the I-15 freeway.

A three-vehicle collision on S. Mission Rd. at 5:23 pm. All declined medical treatment.

One person spun out and stopped at the center divide facing sideways on the I 15 S near 395 S onramp, reported at 5:07 pm. No injuries were reported.

A tree was down on Olive Hill and Gateview Dr. requiring removal reported at 4:59 pm.

There was flooding reported on S. Vine Street in Fallbrook at 4:42 pm.

There was an expanded traffic collision reported at 4:36 at SR-76 eastbound and N. River Rd in Bonsall.

Another expanded traffic collision was reported at E. Mission Rd. and Leon Way in Fallbrook.

At 1:10 am this morning a traffic collision was reported at Camino Del Cielo and Camino Del Rey.