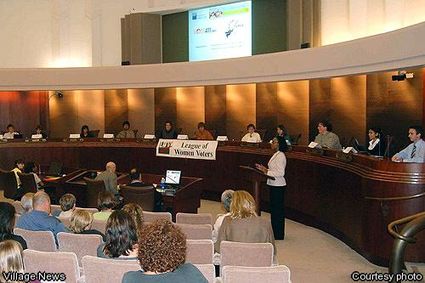 Taking place at City Hall in Escondido, the debate pitted students from the charter school against one another in a discussion of various political issues.

The student debate occurred just after the televised debate of presidential candidates Barack Obama and John McCain, which was screened for students and audience members in the City Hall auditorium.

The students tackled some of the same issues discussed, debating such topics as the war in Iraq, the US stance with regard to Iran and greenhouse gasses/global warming.

Zach took the Democratic position in discussing the Iraq war with his opponent and Daniel argued on the Republican side in a debate on global warming and oil drilling. Cole argued as a Republican on the issue of lifting the US trade embargo with Cuba.

A total of 11 HTHNC students took part in the program. The newest High Tech High charter school campus in San Marcos now includes 15 Fallbrook and Bonsall residents among its freshman and sophomore classes.