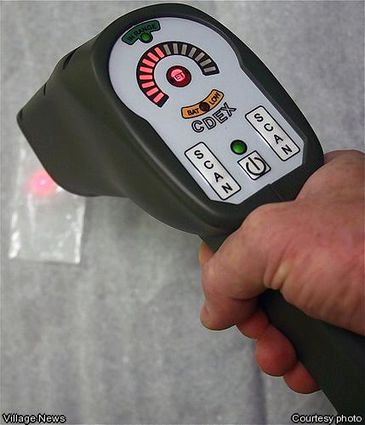 The ID2 Meth Scanner has been developed by CDEX.

Every day across the country, law enforcement officers risk their lives to keep civilians safe by dealing with gang members, drug dealers and traffickers.

However, by doing so, officers also endanger their health by having to handle and identify confiscated drugs in order to use them as evidence.

The most commonly used method to identify illegal narcotics is by doing a chemical test, which involves actually handling the drugs in order to identify them by matching them to color-coded chemical reactions.

This can be potentially harmful to law enforcement officers, especially if they accidentally spill the drugs onto themselves.

Additionally, testing for the identity of the drugs tampers with evidence that could be used against a suspect in court.

In order to assist officials in identifying drugs safely, CDEX, a company based in Tucson, AZ, that develops, manufactures and distributes products to the healthcare and security markets, has developed the ID2 Meth Scanner.

The scanner uses photoemissions of wavelengths in order to detect trace amounts of illegal drugs, such as methamphetamine, on virtually all surfaces, including skin, clothing, plastics, wood, metals and masonry.

When the scanner is pointed within two to ten inches of the drug, it senses the resulting photoemission, identifying the drug.

“The scanner was created in order to replace the current chemical matching drug test used by police,” said Matthew Stratton, a spokesman for CDEX. “The officers do not have to directly handle the drugs or destroy the evidence, but the results are just as accurate.”

The chemical components of methamphetamine have a 60-percent absorption rate when they make contact with skin, so even when a person washes his hands after dealing with the drug, the scanner can still detect trace amounts.

“Methamphetamine dealers handle the drug directly, so it will be detectable on their skin and clothes,” explained Stratton.

The scanner is designed for use in law enforcement, prisons, schools, home inspections, cars, hotels, homeland security, immigration efforts or anywhere else methamphetamine is suspected to be produced or used.

However, the scanner does not work from long distances and is not recommended for use on someone without their consent, as it is a breach of the 4th Amendment.

“CDEX wanted to be able to contribute its technologies in order to make the world a better place,” said Stratton.

The ID2 Meth Scanner can be purchased directly through the CDEX Web site purchased through retailers across the country.

In North County, a scanner is available for demonstration in Ramona.

For more information on CDEX and its products, visit http://www.cdexinc.com.