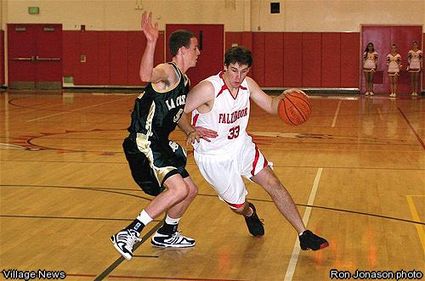 The Warriors played hard and remained within reach for the early period of the game, but the sheer athleticism and sharp-shooting of the Mavericks left a double-digit deficit for the majority of the game.

In the first quarter, Fallbrook found it difficult to defend the 6’9” center, Dennis Kramer. Not only was he a tough player to defend on the block, but he also had an excellent shooting range, making the undersized Warriors often double-team the big man.

Overall, Fallbrook did a decent job guarding Kramer and found themselves behind by 12 points.

However, in the second quarter, the Warriors turned the ball over and allowed the Mavericks to find open looks at the basket. LCC’s Jake Ducey and James McCann took advantage of such opportunities.

Fallbrook guard Taylor Berryman was often able to run the offense with his speed and agility. However, the Warriors failed to convert these chances.

At the end of the second quarter, the Warriors were down 40-18.

Toward the middle of the third quarter, the Mavericks played their weakest unit, for the game was well out of reach for the Warriors.

Fallbrook’s Jake Ware and Oscar Munson continued to play hard, but the fast-paced offense of the Mavericks had worn out most of the Fallbrook players. 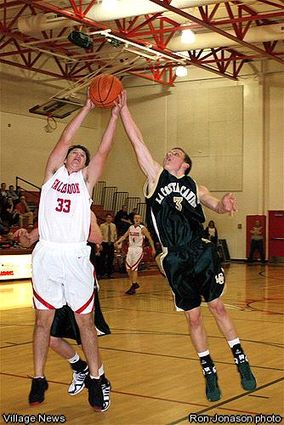 LCC finished the game with a 69-36 victory. Kramer, Ducey and McCann all scored in double figures. Fallbrook’s leading scorer was Jake Ware with nine points.

“It’s tough when you have a six-nine guy. We did our best on him; we kept him off the boards pretty well. The game just kind of got away at the second half,” said Berryman.

After the game Fallbrook coach Jeff Brandow said, “Well, we played hard. I have to do a better job execution-wise and that falls on me. La Costa is…one of the top three teams in the county. They’re well coached and they’re big. The bottom-line is we have to get better and that, once again, falls on me.”