Eskue signs with U of Pacific 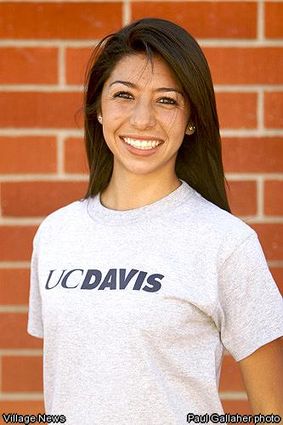 Fallbrook High School senior Lizzy Eskue has signed a letter of intent to play field hockey for the University of the Pacific.

“I think she’s going to be a good addition to our program,” said Pacific field hockey coach Linda MacDonald.

Eskue had also been considering offers to play at Louisville, Miami of Ohio, and Kent State before choosing to play at Pacific.

“When I went on my official visit in August, I just kind of knew,” she said of her selection of Pacific. “It felt right. I just love the campus and the coaches and the girls there.”

“The Fallbrook kids I’ve had in the past, I think they’re great kids. Kathy Waite does an awesome job of coaching them,” MacDonald said. “I’m looking forward to having Lizzy come out.”

Eskue was born at Tri-City Hospital and was 4 when her family moved from Oceanside to Fallbrook. She attended elementary school at Maie Ellis and La Paloma.

She was in seventh grade at Potter Junior High School when she took up field hockey after being urged by a friend to play.

Eskue, who was a defender in high school, began her career as a goalie but desired more action. “I was so bored back there,” she said.

Eskue spent her first two Fallbrook High School years on the Warriors’ junior varsity squad and was on the varsity as a junior and senior.

In 2007 she was an honorable mention all-league selection, and in her senior season she was named to the Avocado League’s first team and to the CIF Division I second team.

Her participation in the off-season indoor league earned her a berth on the California team at the 2008 National Field Hockey Indoor Tournament.

MacDonald recruited Eskue as a defender, but Eskue can also play midfield and forward and was a forward during drills. “Scoring is always exciting,” she said.

“She definitely has a presence on the field, passes the ball well,” MacDonald said. “She’s aggressive. She’s quick.”

Eskue believes that three years of participation in the off-season regional Futures Tournament and in the National Field Hockey Indoor Tournament contributed to her ability to earn a college scholarship.

Eskue also credits Waite’s leadership. “She really drives me to do my best,” Eskue said of Waite.

Eskue did not play a winter sport at Fallbrook High School and has played three different spring sports.

She was on the freshman softball team in ninth grade, competed in junior varsity track and field events as a sophomore, and spent eleventh grade on the varsity lacrosse team.

She is unsure about a spring sport this year.

Eskue is also active in Girl Scouts and as a volunteer at Fallbrook Hospital.

“I think she has a pretty good chance of seeing playing time as a freshman,” MacDonald said.

“[Eskue’s scholarship is] well deserved, and I look forward to a strong Division I college career,” Waite said.

“It’s a relief,” Eskue said of signing her letter of intent to play in college. “It’s just another stepping stone in my life, and I’m very excited to be taking that step.”