Murphy to play baseball with APU 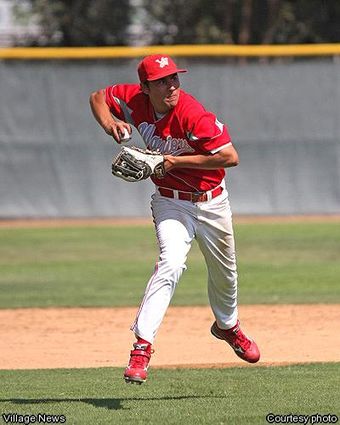 Sam Murphy makes a play in the shortstop position for the Fallbrook Warriors.

This year Sam Murphy will be playing baseball for Fallbrook High School. Next year he will likely be on the Azusa Pacific University team.

Murphy signed a letter of intent February 5 to play for the Cougars. “It’s real exciting. I’m just real excited to get out there next year and hopefully be an impact player,” Murphy said.

“We’re very proud of him for his efforts and we’re very excited for him to continue playing baseball at the next level,” said Fallbrook High School coach Jesse Schuveiller.

“I think that’s a tribute to the fact that he’s stuck with baseball,” Schuveiller said. “He’s showing a lot of patience.”

In fact, Murphy doesn’t have a four-year full scholarship to Azusa Pacific as the program requires freshmen to establish themselves before any athletic scholarship money is received. “They want to make sure that you’re going to impact the program before they give you money,” Murphy said. “That’s just going to make me want to put in extra time hitting, in the gym, whatever.”

Murphy had been leaning toward Villanova, but Azusa Pacific was closer to home. The Cougars are affiliated with the NAIA and play in the Golden State Athletic Conference which also includes Point Loma Nazarene University, San Diego Christian College, and Concordia University in Irvine.

A deciding factor in Murphy’s choice of Azusa Pacific was where he would attend college if he wasn’t playing baseball. “I’ve heard nothing but great things about this school,” said Murphy, who plans to major in business administration.

The Azusa Pacific coaching staff was also a factor. “They have a real good coaching staff,” Murphy said. “They’ve set up a really good program there.”

“We’re just excited that he decided to come to APU,” said Azusa Pacific associate head coach Robert Ruiz. “We think he’ll be a great addition to the program.”

“We think he’s a versatile athlete,” Ruiz said. “We like having him in the middle infield, but we also think he could move around.”

Murphy was born in October 1991 in San Diego, and the Murphy family moved to Bonsall in 1992 and to Fallbrook in 2001. Murphy attended Tri-City Christian through eighth grade before spending four years at Fallbrook High School.

He began his organized baseball career in Little League, playing in the Vista American, Vista National, and Bonsall organizations, but he soon turned to travel ball. “The competition’s a lot better with travel ball,” he said.

For the past four years Murphy has played with the West Coast Bulldogs, who are coached by Palomar College head coach Buck Taylor.

Murphy has not played any sports other than baseball at Fallbrook High School. He split the 2006 season between the freshman and junior varsity teams but has been on the varsity since tenth grade. As a junior in 2008, Murphy received honorable mention All-league recognition.

“He’s been able to grow and mature,” Schuveiller said. “He’s established himself as a leader.”

In August 2008, Murphy represented Fallbrook High School in the CIF Coaches Showcase in Poway. “That was pretty big,” Murphy said. “I really enjoyed that one.”

The CIF Coaches Showcase allowed college coaches and professional scouts to evaluate the players. The Senior Fall Classic Baseball Showcase in Peoria, AZ, October 16-19 gave scouts across the nation the opportunity to look at approximately 1,250 players from the United States and Canada.

“They were looking at me before that, but I hear they really liked how I played at that tournament, so I think that was a big help,” Murphy said of the Senior Fall Classic.

At the Peoria tournament – which was founded by the brother of former Fallbrook High School baseball coach Dave Heid – Murphy was selected to join the Bayside Yankees, who are based in New York and who have won four of the past five National Amateur Baseball Federation national championships and won seven consecutive NABF national titles in the 1990s.

“Aggressive at the plate, knows the game well,” Ruiz said of Murphy. “He brings a lot to the table from a character standpoint as well. He’s a real good kid.”

In addition to his baseball activities, Murphy is active with North Coast Church. He has been involved in the youth group and community service work, and he has also been part of Fellowship of Christian Athletes.

“It’s a testament to his character that he’s going to get to play at the next level,” Schuveiller said. “We are very proud of Sam and we know that he’s an excellent representative for the Fallbrook baseball program.”