Beloved longtime thrift store shutting its doors, but not by choice

Thursday was the final day to shop at St. John's Thrift Store 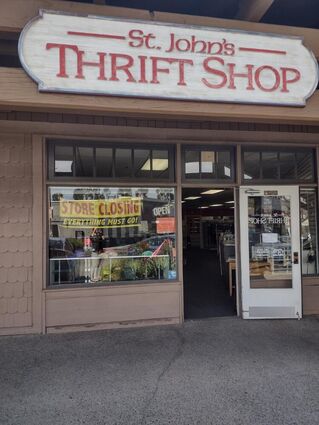 It was a flurry of activity Thursday at St. John's Thrift Store. Despite the impending closing, the volunteers and managers put on happy faces and helped customers, and packed up things to move out.

After its 50-year history and second location, St. John's Thrift Store's board was given a 30-day notice to vacate the property from Bessie Chin, of Chin Ciardella Properties, LLC of Rancho Santa Fe, California. Attempts to reach her were not successful. St. John's last day of business is today, July 21. The store will be gone as of Saturday, July 23.

"Yes, Saturday is our last day in here to clean it up. We don't want to leave 'the house' dirty," Manager Michele Scott said.

"We've been busy for the last three weeks putting things on sale, and getting ready to move," said Scott said. She said she and Assistant Manager Jennifer DeMeo and the volunteers were only given three week's notice.

Scott said when asked about moving the location, "The board decided it was not feasible due to logistics, finances and the unavailability in town for a new location."

"When life sends you a curve ball either you marinate in it or you get back to work," Scott said, adding that she got back to work.

"The province of this thrift store is that it has been at least 20 years in this location, and it's been open 50 years. This is the second location," she said, adding that the store has been on a month-to-month lease and Chin is within her rights to have it vacate.

"A month or so ago, the air conditioning went out here. We watched other stores in the mall get theirs fixed. I finally called her and told her my customers and volunteers were sweltering in this heat, and there were elders who were under heat distress," Scott said.

"Her answer was to bring in a few fans," Scott said, adding that Chin told her the AC would be replaced after St. John's moved out.

St. John's Thrift Store has been a member of the community for decades. It was started by the Episcopal Church many moons ago, and moved into being a totally-committed to community thrift store.

Smaller than the other thrift stores in town, St. John's kept its prices reasonable and offered a much variety. "We even outfitted the homeless," Scott said.

"When you are doing purposeful work, there is no greater hook than helping the community, volunteers and customers," Scott said.

"Lots and lots of customers are very sad we are closing. Volunteers are, too," said Jen DeMeo.

"Our shoppers were not just customers," Scott said. "We really know these people. We knew their families and their lives. We focused on relationships. It sets us apart from other places," Scott enthused, adding that one of their customers is 101, and still comes in to shop.

"We have remarkable customers," Scott said.

Additionally, St. John's Thrift Store is non-profit, with only two paid positions of the manager and assistant manager. "We're both resilient and can bounce back from this. I just loved this job, loved it," DeMeo said.

Scott said to lift the spirits of the volunteers they had a Princess Tea and played BeeGees music last Saturday, July 16. They had a pizza and pasta party yesterday.

"We have approximately 17 volunteers who have been keeping this enterprise afloat," Scott said. "All our volunteers are exceptional!"

"We have one volunteer who is 93, Ruth Mowat," Scott said.

"We had a guy who looked at every donated watch and made sure it works. We have a lady who researches all the high end stuff and prices it accordingly. Another lady did the jewelry and made sure it was all working and clean. She's set it up in an organized way," Scott shared.

"Those are just off the top of my head, and we've helped many more local programs," Scott said.

In addition, St. John's Thrift Store worked with two programs – Divine Path and Care-Rite Vocational Programs – to bring developmentally disabled people into the store to train them, and have their help. "I like to call them Handy Capable," Scott said. "They come in to help us and are such a delight. We helped each other."

I am sorry that this has happened. The impact of this closure is far-reaching. Many who have been blessed by this shop over the years will be impacted. The volunteers who faithfully served will be impacted. May God bless both the customers and the workers.