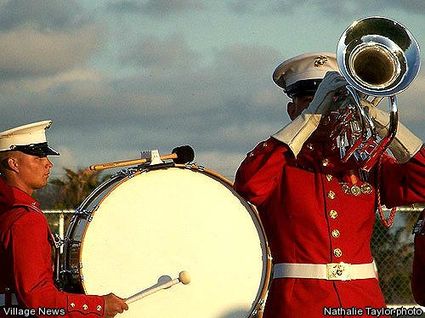 Various instruments are used in the US Marines Drum & Bugle Corps.

Uniform. Merriam-Webster’s dictionary defines the word as: “Having always the same form, manner or degree: not varying or variable.” That word describes the manner of marching and musical accompaniment at Camp Pendleton’s Battle Colors Ceremony, which was held twice on Friday, March 6.

It looked like well over a thousand spectators filled the bleachers and spilled out onto the grassy football field in the late afternoon as the “Commandant’s Own” – the United States Marine Drum & Bugle Corps and the Silent Drill Platoon demonstrated their skills in 55-degree weather. Occasio...