'The Outsider' is hilariously brilliant 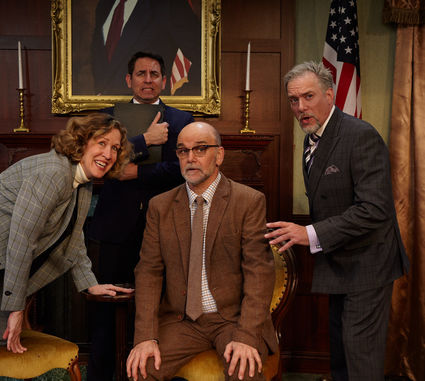 Pollster Paige Caldwell, played by Shana Wride, confides with Gov. Newley, played by John Seibert, and Arthur Vance, played by Louis Lotorto, as Dave Riley, played by Christopher Williams, looks on from the back in "The Outsider."

When I am wrong, I am really wrong. As it turns out, this remarkable cast does exceptional work. In my defense, let me explain.

As a member of polite society, it was a conscious decision to attend the current show offered at North Coast Repertory Theater called "The Outsider." It's a political spoof. I know, you just want to groan.

After all, have we all not collectively agreed, when amongst strangers, not-to-ever discuss religion or politics?

Therefore, one has to ask, "Self, why purposely go to a show about politics which will possibly incite outrage to one's self or perhaps, the stran...