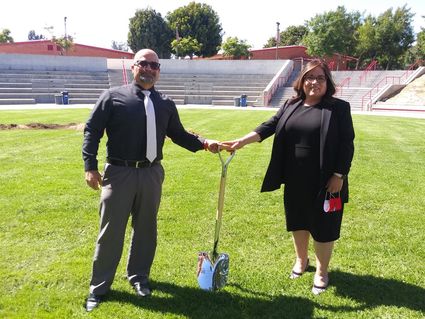 Construction work on the Fallbrook High School library, cafeteria, amphitheater, and restrooms will begin June 7, and the groundbreaking was held May 21.

Concrete seating will be provided for the outside amphitheater known as "the bowl," which will also be improved to current Americans with Disabilities Act standards. The work for the buildings will involve asbestos abatement and carpeting where appropriate, and new fire alarm systems will be installed.

"Lots of work is going to take place over the summer," Iglesias said.

In November 2016, the Fallbrook Union High School District voters approved Measure AA, which authorized $45 million of general obligation bonds for capital improvements at FUHSD facilities. "We are moving forward with the bond's promises of essential and critical infrastructure," Iglesias said.

In October 2020, FUHSD staff solicited proposals for the work. Six firms responded by the Dec. 3 deadline, and three of those were selected for interviews. The Jan. 11 FUHSD board meeting selected Balfour Beatty as the preferred firm and authorized FUHSD staff to negotiate a price with the company which is based in San Diego. The May 10 board meeting included approval of an agreement with a guaranteed maximum price of $7,794,503. Balfour Beatty is a subsidiary of Balfour Beatty, PLC, which was founded in England in 1909; the San Diego office specializes in school construction. 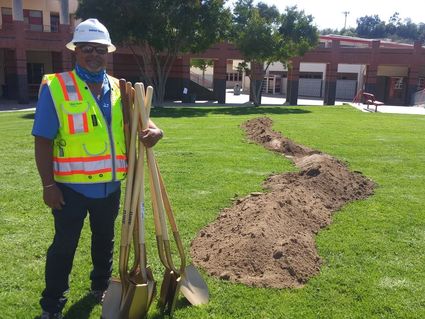 In addition to the actual construction workers Balfour Beatty will have three staff members on site throughout the construction: project manager Louise Adamson, project superintendent Michael Carey, and project engineer Tasha Turner. Adamson has just completed the renovations at Chet F. Harritt Elementary School in Santee, and she also has construction experience in Montana. Adamson, who joined Balfour Beatty approximately 1 1/2 years ago, has approximately 20 years of construction experience including when she lived in the Montana town of Whitefish.

The Fallbrook High School construction is expected to be complete in early fall.

"These are needed updates, and I can't wait to see the end result," Iglesias said.