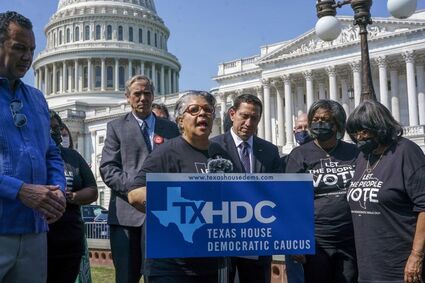 Texas state Rep. Senfronia Thompson, dean of the Texas House of Representatives, is joined by Sen. Jeff Merkley, D-Ore., left center, and other Texas Democrats, as they continue their protest of restrictive voting laws, at the Capitol in Washington, Friday, Aug. 6, 2021. (AP Photo/J. Scott Applewhite)

AUSTIN, Texas (AP) – Texas Democrats still refused to return to the state Capitol Saturday, Aug. 7, as Gov. Greg Abbott began a third attempt at passing new election laws, prolonging a months long standoff that ramped up in July when dozens of Democratic state lawmakers left the state and hunkered down in Washington, D.C.

"A quorum is not present," Republican House Speaker Dade Phelan said, who then adjourned the chamber until Monday.

More than 50 Democrats last month bolted to the nation's capital, but the precise whereabouts of each...