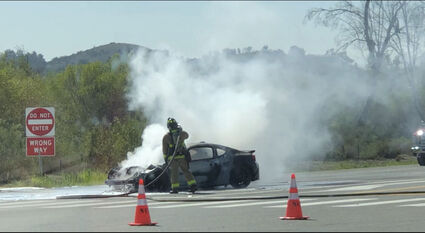 A firefighter puts out the last flames of a car fire on SR-76 near Gird Road, Oct. 22.

The eastbound lanes of state Route 76 at Gird Road in Fallbrook were closed due to a vehicle fire earlier today Caltrans reported.

Motorists experienced some delays while firefighters battled the blaze, which was knocked down at 12:55 p.m., NCFPD spokesperson John Choi said.

"The sedan rear-ended the pick-up truck and the sedan caught fire," Choi said, adding that the fire did not spread to vegetation.