Sheriffs train for active shooter and put it into use immediately 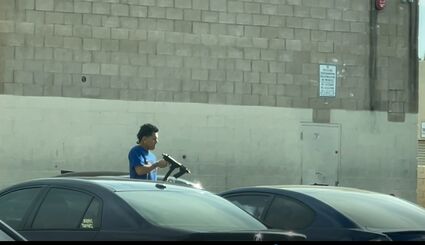 This male was chasing people and pointing what was later found to be an airsoft or BB gun at them in the parking lot behind CVS, July 21. Village News/AC Investigations photo

Fallbrook Sheriff deputies responded Thursday, July 21, at about 5 p.m. to a report of a black Mercedes behind CVS with people inside waving and pointing a gun at people.

Deputies responded in force, ready for a possible live shooter situation. Six units, 11 Fallbrook deputies and a canine showed up with guns drawn.

Fifteen males were detained, sitting on a curb with their hands behind their head, feet crossed and wrists tied.

Sgt. Scroggins, the sergeant in charge, said they received a call about the Mercedes with people pointing guns and they said it was parked ov...