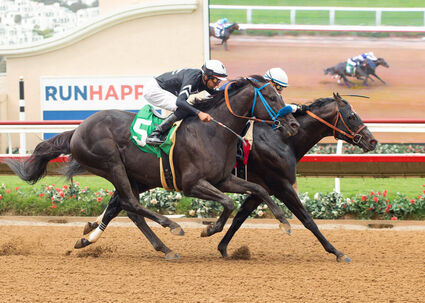 Go Joe Won, in back, holds on to his lead to win the fourth race at Del Mar, Aug. 4.

The 3-year-old ridgling had a winning time of 1:37.58 in the one-mile dirt race for horses 3 years old and upward with no previous wins. Go Joe Won finished a head in front of second-place Hero Status.

"The race was a good one," said trainer Paula Capestro.

Capestro expressed her appreciation to owner Eric Hurst, who is based in Ohio, for allowing her to train Go Joe Won. Capestro also thanked breeder International Equities Holding, Inc....