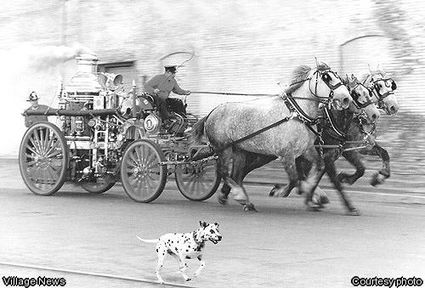 The American, a 1902 horse-drawn steam pumper

FALLBROOK — On December 6, the 27th annual Fallbrook Christmas Parade will march down Main Avenue with the public-submitted theme “Fallbrook’s Christmas Spirit.” The theme gives entrants a chance to demonstrate their decorating abilities and entertain the thousands who line downtown to watch the area’s largest nighttime parade.

The winner of this creative pen contest is Bennielyn Verrett, a Fallbrook resident. She will be featured in a special car in the parade.

There are several other notable entries signed up for the parade this year. One is The American, a 1902 horse-drawn steam pumper that appeared here in 2004 and is making a much-anticipated return visit. New to the parade this year will be the Oscar Mayer Wienermobile, which will be paying a visit to Major Market before the parade begins. The Shriners’ Tin Lizzies will make a return appearance.

Entry deadline for the parade is November 26. Download an application at http://www.fallbrookchamber.com. Parade sponsors and volunteers to help the night of the parade will be greatly appreciated. Call (760) 728-5845 for more information.