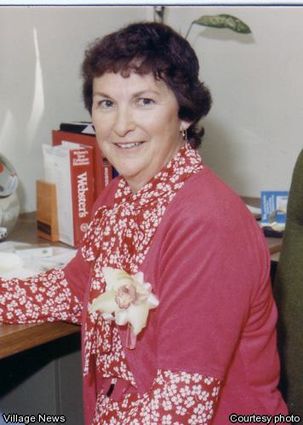 Betty Lou Nickel passed away on October 27, 2008, due to health failure associated with the advanced stages of dementia. Betty Lou was born on August 11, 1926, in Xenia, OH. Her parents were Roger and Carrie Creamer.

On June 1, 1945, Betty Lou married Rev. Raymond L. Nickel. In 1951, Betty Lou moved with her husband and their three daughters to Santa Ana, CA. Her family came to Orange County to organize and build the United Evangelical Lutheran Church of Santa Ana. It began as a mission congregation for the United Evangelical Lutheran Church of America. Two years later, she added a son to her family.

Later, Betty Lou became principal of Sepulveda Elementary School and supervised its building. As a principal, she is remembered for her caring and love. Betty Lou delivered “chicken soup” to staff members who were ill. She brought homemade cookies, cakes and pies to staff members on their birthdays. Every day she was on the playground with her students, organizing and then officiating intramural games and tournaments.

Betty Lou buried a daughter in 1968 and her husband in 1990. Following her retirement, Betty Lou moved to Fallbrook. In Fallbrook, she began to attend Christ the King Lutheran Church and joined its Chancel Choir. In 1995, she married Henry Nickel, the younger brother of her first husband.

Betty Lou is preceded in death by both of her parents; her only brother, Howard; her first husband, Raymond; and daughter Connie Lou.

A memorial service will be held Saturday, November 8, at 12:30 p.m. at Christ the King. A reception will follow the service.

In lieu of flowers, her family encourages you to make a donation in her name to an elementary school to memorialize her commitment to serving the educational needs of all students.