The long road back to Japan 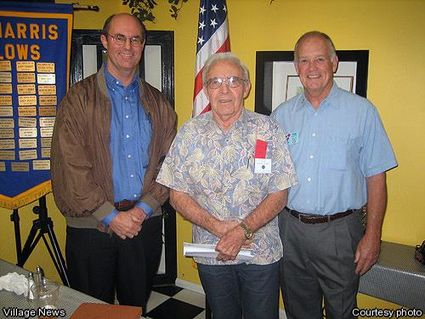 FALLBROOK — Stephen V. Lopardo, a well-known local attorney, recently presented Fallbrook Village Rotary with a true example of dedication to his father’s wishes and his own perseverance.

Lopardo’s father was an intelligence officer in the Marine Corps in World War II and was involved in the battle for Iwo Jima.

One of the few Japanese taken prisoner was brought to him for questioning. Neither could speak the other’s language, but both were fluent in French.

The prisoner, Taizo Sakai, was a great source of information for the Americans about the defenses of Iwo Jima.

Before Taizo was taken to the rear, he gave Lopardo’s father two pictures of his family and asked, “After the war, will you return these to my family in Japan?”

The elder Lopardo agreed, but after leaving the service he returned to the workplace and did not find the time to return the photos. He asked his son, Stephen, if he had the chance, to please return the photos to the family.

Stephen Lopardo took his father’s wishes to heart, traveling to Japan several times in an attempt to locate the family, but was unsuccessful.

By luck, he was skiing in British Columbia and met a Japanese man who thought he could help. A combination of Lopardo’s perseverance and the happenstance meeting with the Japanese man proved to be the stone that broke the ice.

The Japanese ministry involved with locating missing veterans opened their records, finding the son of Taizo Sakai. Taizo had long since passed away, but Lopardo returned the photos to Taizo’s son. The meeting was recorded on the Japanese version of PBS.