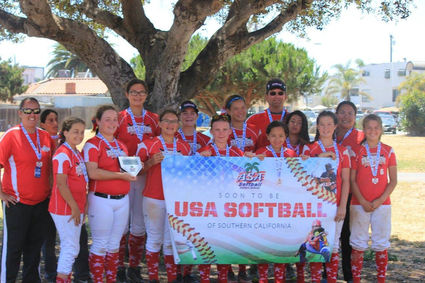 FALLBROOK – The Fallbrook Girls Softball 14U team won four of six games on June 18 and 19 to take third place at the San Diego County District’s tournament.

They also qualified for the state tournament July 1 to 3 in Lancaster. This team is made up of seven 11 and 12 year olds, and four 13-14 year olds playing in the 14U division.

The girls have played hard through every pitch, every swing, every error, and even through scorching heat. Over the district tournament weekend they scored 50 runs and took out 4 teams to advance to the next level.

The team practices four days a week, three hours a day and on weekends they play tournaments spending many hours on the field. Their hard work has definitely paid off in the last few weeks. Some of the girls have hit their first home run, first grand slam, even laid down their first bunt in this all-star season.