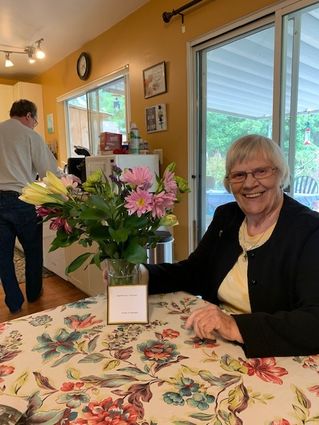 Gwenfil Jean Gibney died peacefully Aug. 6, 2020. Her spirit of love, service, joy and encouragement blessed all who met and knew her.

She is survived by her beloved sister, Elvie English of Edmonton, Alberta, Canada; and her beloved children, David Gibney of Bonners Ferry, Idaho; Mark Gibney (Ginny) of Colorado Springs, Colorado; Joel Gibney (Jaycie) of Annappolis, Maryland; Brien Gibney of Washington; and Shauna Gibney Fawcett of Niskayuna, New York; also 18 grandchildren, seven great-grandchildren, four great-great-grandchildren, many nieces and nephews and many more who she enveloped with her love and who called her "Mom."

Gwenfil worked at Fallbrook Hospital for 25 years from 1971-1996. She was head nurse on the overnight shift. She also designed, planned and developed the recovery rooms for Fallbrook and the Camp Pendleton hospitals.

She was always involved in works of service at her church where she was lovingly known by all as Grandma Gwen. She was involved in the vestry (board) of her church, and she would coordinate and bake for all kinds of celebrations and luncheons there.

Her greatest and proudest accomplishments were her children and grandchildren. They were the loves of her life and she was happiest when she was with them. She will be greatly missed by her family and all who knew her.

Memorials may be given in her name to Christ Church of Fallbrook, 2000 Reche Road, Fallbrook, CA 92028.

Per Gwenfil's request, a memorial service and interment will be held in Edmonton, Alberta, Canada, next to her beloved husband, Michael, at a later date.