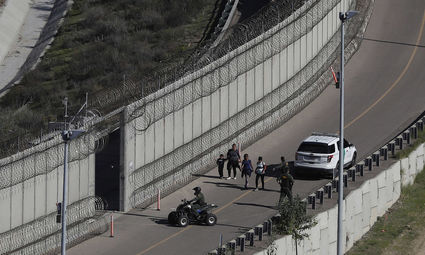 In this Dec. 16, 2018, file photo, Honduran asylum seekers are taken into custody by U.S. Border Patrol agents after the group crossed the U.S. border wall into San Diego, in California, seen from Tijuana, Mexico. The state of California is freeing up to $28 million to help asylum-seekers released in the U.S. with notices to appear in court with hotels, medical screenings, and transportation. California's generosity is a stark contrast to Arizona and Texas, where border state officials have challenged and sharply criticized President Joe Biden's immigration policies.

SAN DIEGO (AP) – California is freeing up as much as $28 million to help immigrants arriving from Mexico and being released in the U.S. until their court dates, a sharp contrast from other border states that have emerged as foes of President Joe Biden's immigration policies.

The funding, expected to last through June, comes as Biden unwinds former President Donald Trump's policy to make asylum-seekers wait in Mexico until their court hearings. It will pay for hotel rooms for immigrants to quarantine during the coronavirus pandemic before going to their final destinations throughout the U....