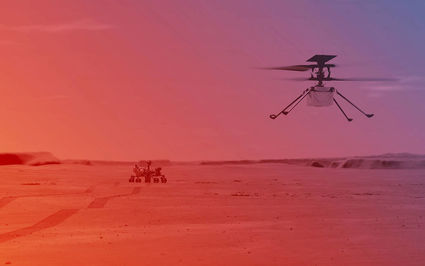 An illustration of NASA's Ingenuity Helicopter flying on Mars. Ingenuity, a technology demonstration experiment, will be the first aircraft to attempt powered, controlled flight on another planet. Ingenuity arrived at Mars on Feb. 18, 2021, attached to the belly of NASA's Mars 2020 Perseverance rover. Ingenuity is expected to attempt its first flight test in spring 2021. NASA's Jet Propulsion Laboratory built and manages operations of Perseverance and Ingenuity for the agency. Caltech in Pasadena, California, manages JPL for NASA. For more information about Ingenuity, go to: mars.nasa.gov/technology/helicopter.

PASADENA – NASA officials said today they're targeting Monday for a historic flight of a small helicopter on Mars that was postponed last weekend due to a technical problem.

The 4-pound helicopter named Ingenuity is now scheduled for approximately 12:30 a.m. PDT Monday. A livestream will begin at 3:15 a.m. PDT as the helicopter team prepares to receive the data downlink in the Space Flight Operations Facility at NASA's Jet Propulsion Laboratory in Pasadena, NASA said Saturday.

Ingenuity was designed and built at JPL. It was set to make its historic first flight - the first on another worl...