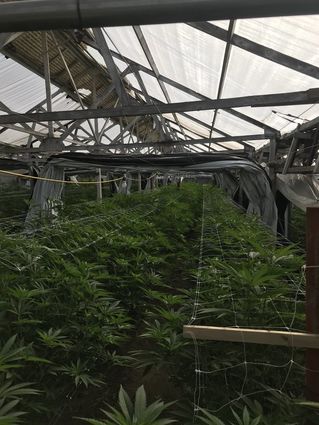 Members of the Sheriff's Special Enforcement Detail served a search warrant at a property off of Huntley Road in Rainbow May 5 and removed over 8900 marijuana plants, 20 pounds of processed marijuana and a loaded 30-06 rifle.

FALLBROOK – Deputies of the Fallbrook Crime Suppression Team were assisting area detectives with an unrelated investigation when they discovered an illegal marijuana cultivation operation near the 9100 block of Huntley Road in Rainbow. A search warrant was obtained for the property which contained approximately 15 large green houses and two residential buildings.

Members of the Sheriff's Special Enforcement Detail served the search warrant at the property May 5 and detained seven individuals who were later determined to be working at the illegal marijuana cultivation operation.

The estimated street value of the seized marijuana is more than $7 million. Felony charges will be filed with the San Diego County District Attorney's Office against the subjects who were detained at the scene.