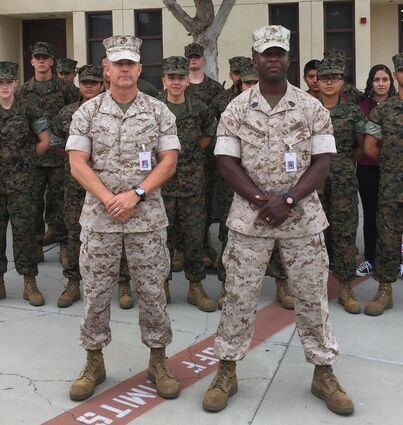 FALLBROOK – In military tradition, changes in leadership are an expected part of growth and development. This past summer, LtCol William Wade and Master Sergeant Brian Richardson decided it was time for the Fallbrook Union High School Marine Corps JROTC to follow in that tradition.

Wade and Richardson began working with FUHS administration to select the next generation of leadership that would replace themselves. The new leadership needed to be up to the challenge of taking the Warrior Cadets of FUHS forward to even more success. As of Jan. 3, the new leaders of the program, Chief Warrant Officer-3 Thomas Smith and Master Sergeant Martin Huizar, have been selected and are fully in place.

In the tradition of the military "Hail and Farewell," the departing leadership takes a moment to look back on the development and achievements of the program so far and looks forward to the exciting future of the program under the new leadership.

The beginning was in 2014 and LtCol Wade, a 24 year Marine Corps combat pilot, having recently retired, had some time to wonder why his hometown of Fallbrook didn't have a Marine Corps JROTC leadership program at FUHS. With the proximity to Camp Pendleton, its resources and all the leadership, education, and personal development opportunities for the students, it seemed like a natural fit.

Wade reached out to the superintendent and school board and asked if they were interested in bringing the program to the district. They immediately answered, "what do you need to get this done?" And so a seven year odyssey for Wade began. At the time, Wade was not on staff with FUHS, so he volunteered his time for a year and half advocating with the Marine Corps for acceptance of a FUHS MCJROTC program and coordinating with FUHS.

Worldwide there are only 260 Marine Corps JROTC units authorized to be funded. Since all of these high school slots are normally filled, to start a new unit another school has to drop out. High School applicants then go through a highly competitive process to vie for that spot. With the FUHS team's unrelenting persistence, the Marine Corps initially agreed to an intermediate program called a National Defense Cadet Corps for FUHS.

With a strong belief in the program's benefits for the student body, the FUHS School Board voted to fully fund the Marine Corps NDCC unit. The board was confident that the program would successfully compete for one of the 260 fully funded spots in the near future. Becoming one of these units would mean the USMC would pay for all uniforms and equipment, student travel and half of the Marine instructors' salaries on an ongoing basis. The board was advised, however, that it could be a years before they could compete for one of these prized spots.

The program was in its infancy at the school. To succeed in this start-up situation required dedication to building the program from the ground up. MSGT Brian Richardson, a 21 year USMC veteran who served as an amphibious tank specialist and drill instructor, was carefully selected to join Wade in building the program as soon as FUHS was given the go ahead by the USMC.

Noted Wade, "We were training students to become leaders and that is a minimum of a four year process so that they can then turn and lead the generations behind them. The task was well beyond the requirements of a regular job with many weekends and late days. We knew MSGT Richardson was up for the challenge and shared our deep dedication to seeing that student cadets had every chance to be successful in the program and, more importantly, life." The students adapted very quickly and were eager to take on more responsibility. The family and community support for the program was strong.

In the first year of the program (2016/17), FUHS Cadets made the Marine Corps Training and Education Command and other Marine Corps schools across the nation sit up and take notice of FUHS and its student leaders. The inaugural group of cadets fought their way to being finalists at the JROTC National Physical Fitness Team competition.

The Cadet Academic Team also qualified to compete in the JROTC National Academic Competition in Washington D.C. The Marine Corps then did something almost unheard of. Based upon the unit's high profile successes within the first 18 months of the program, the USMC approved FUHS for a fully funded MCJROTC unit. FUHS became one of the country's 260 MCJROTC programs.

In the seven years since Wade first approached FUHS about establishing the program, the Fallbrook High JROTC program has become a nationally known program. FHS Cadets have gone on to make it to the National Academic Championships in Washington for three of the last five years competing. The Physical Fitness team is nationally recognized and the Raiders (Orienteering) Team is a powerhouse in the Southwest Region. Two cadets so far have also received coveted appointments to the United States Naval Academy (Equivalent to $1.2 million in scholarships in addition to many other scholarships and awards for the cadets)

As Wade and Richardson move on from establishing the program, they could not be prouder of the cadets and their profound accomplishments over the past five years. "These kids just needed a structure to find their leadership potential and gain confidence in their amazing talents. We challenged them, no doubt. We expected a lot from high school students. We held them to the standards of the Marine Corps. It was very daunting for many of them but as they progressed through the program they met that challenge and in the process developed a lot of self-confidence, focus on their future and maturity. It all came together. With the support of the school administration and community they had the ability to do that," said Richardson.

Wade and Richardson both enjoy a challenging opportunity and now that the FUHS JROTC program is successfully off the deck and flying, they are moving on to other opportunities. Wade completed his service to FUHS on Jan. 3 and will be working on other management and aviation-related opportunities and spending more time with his family. Richardson has taken a position in Texas as a leader of a startup MCJROTC program there.

Smith served 21 years in the USMC as an Avionics Officer. He has 10 years of experience as a senior marine instructor at Beverly High School in Massachusetts. Wade had the opportunity to teach, instruct, do turnover with Smith during the first semester of the 2021-2022 school year to provide a smooth transition for the students and program.

"CWO Smith's vast experience and enthusiasm for the program are evident. He brings boundless energy with him and the cadets are already learning so much from him. The program is in great hands with his leadership!" Wade said.

Huizar is also a well-seasoned veteran with 21 years as a Marine working with light armored vehicles. He had the unique experience of being an Assistant Marine Officer Instructor at the University of Minnesota teaching college students who were officer candidates in the Navy Senior ROTC program. Additionally he was a drill instructor and became the regimental drill master at Marine Corps Recruit Depot, San Diego.

Huizar came to FUHS MCJROTC after serving with the Riverside Sheriff's department. "He has great depth and experience to draw from. The collegiate experience is invaluable to the cadets who are going on to college. His experience on the drill field will be such a benefit to the cadets as well. He was the Instructor to the drill instructors. The cadets will grow so much under his guidance." Wade said.

Like Wade before them, both new instructor leaders are bilingual. This will assist in continuing the inclusive environment of the program for the diverse population at FUHS. Both new instructors share a Hispanic heritage and, as Wade and Richardson did before them, they will continue to foster an environment where student leaders from many backgrounds learn to work together as a cohesive group and support each other.

Wade, Richardson, and FUHS' administration are confident in passing the torch of instructor leadership of FUHS' MCJROTC Warriors to Smith and Huizar. They said they know that, like themselves, they will deeply care for and develop the next generation of accomplished student leaders.

In parting, Wade said, "When Master Sergeant Richardson and I started this program, we had no idea what to expect from the students. We had only worked with Marines, not high school students. We fell back upon our own Marine Corps training and experience over many decades and used that as a framework from which to begin. Evidently it worked. The students had to live up to some very high standards. We pushed hard to develop them academically, physically and morally. We never wanted them to accept mediocrity; if they had a goal in mind, we would challenge them to achieve it. 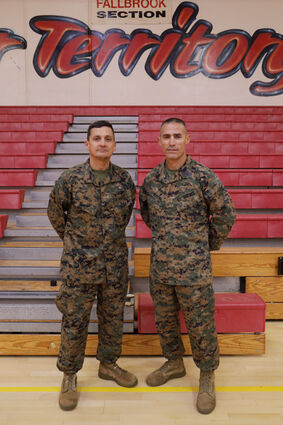 "We did a lot of guidance counseling and along the way the cadets learned to trust us and understand that we truly had their best interest at heart. We taught them that trust and respect is a two way street. Trust and respect is something that is earned; both are very important and precious so don't give it away. We held the cadets accountable for their grades, actions and behavior both on and off campus. We taught them to lead by example every day, have integrity, and to hold themselves accountable. The most gratifying part of teaching and working with the Cadets every day was their personal growth. We got the privilege to see them succeed, graduate and go on to a full and productive adult lives. We know that CWO-3 Smith and MSGT Huizar will do the same. We are cut from the same cloth; Marine Corps Green," Wade added.