Louis Wolf's Daybook from the Warner Store in 1867

We can learn a lot from reviewing the records kept at a nearby general store 155 years ago. In 1867, Louis Wolf was postmaster in Warner Springs and a partner with Thomas Brady in a general store there. Copies of the ledger from the Wolf and Brady store dated December 1867 through July 1868 give insight into the local economy.

Viewing the daily accounts, it appears that customers were not just shopping, but many stopped by to smoke, chew, drink alcohol, and gamble on card games. The store was a social center, bank, and a place to sell their goods. It offered lodging to travelers. Lodging fees also included food for the traveler and provisions for their horses. The store was open even on Christmas Day.

The most common purchase was "sundries", indicating a collection of small things not listed. Items sold that we no longer use include: rolls of candlewick, rope, buckskins, hickory shirts, suet, bear meat, gunpowder, and livery oil. Some of the items sold to the store or traded for goods were: salt, goats, flour, chickens, potatoes and soap, corn, barley, pumpkins and olive oil.

Payment was often by gold dust. Other means of exchange were government vouchers, greenbacks and "legal tender." Anything manufactured cost more. A pencil cost $.25, and a pocket knife $1, when an entire beef cost only $25.

Certain events can be speculated by analyzing purchasing patterns. For example, Feb. 17, 1868, was payday for Ramone Monreal. After receiving $167.50 in cash from Tomlinson & Company, he bought a horse, a suit of clothes, an undershirt, drawers, two pairs of socks, a cravat, shirt, and collar. Was it in preparation for a wedding? Adding to the clues, on the same day Monreal also bought a veil, skirt, yard goods, trim, and fancy-dress buttons. And, on April 6, he bought household goods and a looking glass.

On a less happy note, on May 18, eight men each paid one dollar toward "sundries for Smithe's woman." Because there were no more purchases to Joseph Smithe's account, perhaps he died. I found another clue when I read that William Wolf bought cattle and oxen from the estate of Joseph Smithe and credited his debt $70 on July 10.

There are certain items that are unfamiliar today. People bought a product called "aguadiente" by the gallon. Breaking it into two words, I thought it was Spanish for "water for teeth," or mouthwash. I wondered why the backwoodsmen would use so much mouthwash. Then I found the term had been misspelled in the ledger, that it was "aguardiente," strong or ardent water, which was moonshine.

They also bought "shorts," a byproduct of wheat flour that includes the germ, fine bran, and some flour. A "manta," a square piece of cloth used as a cloak, was sold by the yard. At first, I thought "hive syrup" was honey, but learned it was a cough syrup made from a plant that had a blossom shaped like a beehive. Toward the end of the account, Wolf apparently used pages to teach a child about measurements and his workbook from so long ago taught me that a quire of paper is one-20th of a ream, or 24 sheets of paper.

At first glance, a person may think the ledger book makes for dull reading, but I consider it a very important time capsule showing life in the past. I viewed every page and collated data of what was purchased, the prices, and the customers' names. From this carefully compiled account book, we learn about life near Temecula during that time. 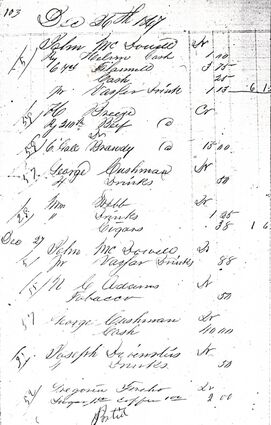 What happened after the last entry of July 10, 1868? Louis Wolf purchased the Little Temecula Rancho and the adobe general store, forevermore called the Wolf Store. Wolf resided in Temecula until his death in 1887. Wolf, a burly, bearded Jewish proprietor came to America in 1851, arriving from the Alsace-Lorraine German and French region. Perhaps Wolf, who arrived in San Francisco at the age of 21, had Gold Rush fever, as he worked as a miner for a short time before making his first appearance in Temecula.

Wolf's obituary in the San Diego Union newspaper stated he began the trading business in a small adobe store with "only brawn, brain, and perseverance as capital, but amassed a snug fortune."

Here in Temecula, we cannot forget Louis Wolf. The adobe store is now a coffee shop in Vail HQ and his sarcophagus stands on a hill overlooking our valley. Plus, a ledger book he kept at a store in Warner Springs brings us information about the daily life of the people there in 1867.